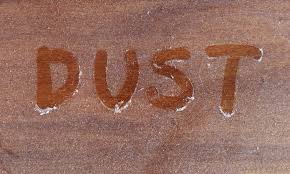 “Where does dust come from?” This is a question that was rhetorically asked in a writing course I recently participated in. And because I am who I am, I remembered that I have always wondered that same thing myself.

I have a fairly large, dark wood coffee table in my living room. I love this table. Of course. I would not have chosen it to grace my living room and look at it every day if I didn’t. It has a big shiny surface. Which happens to be its only flaw.

Why is it a flaw? Because I can spend 5 minutes dusting the balls out of that thing and a mere few hours later? Dust. All over it.

And when the sun is coming through the windows just so (I love the sun coming through my windows, but only when no one is here, including myself), you can see it float down and land right on the surface of that newly dusted table and every single, ever-loving item in my house.

So, where does dust come from exactly? I wasn’t sure, so I looked it up. For all those who are like me and wander into strange places while thinking, or if you missed that day in fifth grade science class, here is where dust comes from. You’re welcome.

As taken from wiseGEEK (www.wisegeek.org):

“…it is largely made up of dead skin cells, fibers from clothing and other materials, pollen and dander, and tiny particles of dirt. Dust comes from objects in the environment, and from the people and animals that live in it.”

Upon further research, I found out that the average person loses about 40 dead skin cells every second. Most of that thin layer of white stuff you see building up on your furniture? It’s dead skin of you and whoever else lives in or visits your home.

So, basically you have little pieces of pretty much everyone you know in the air that you are breathing. Through your nostrils and into your lungs. That thought makes me want to go out and purchase one of those Walter White type masks. No offense. 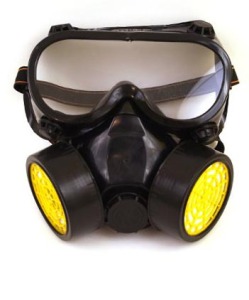 I guess no one has has actually died from breathing in other people’s dead skin cells, so I suppose I’ll just have to suck it up (pardon the pun). I mean, I’ve survived the first forty-nine years of my life living this way. I think I can survive the next uh…forty-nine (it’s possible).

In the meantime, I believe I’ll be investing in some more Pledge. Oh, and can you do me a favor before coming over next time? Slather up with some body lotion, would you? Like, maybe bathe in it? I just really hate dusting. 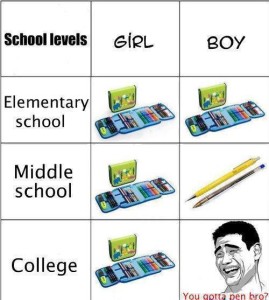 I had plans to write a really funny and witty post about the differences between boys and girls and the preparation of college, but I may be falling a bit short (can’t you tell by my title?).

I had this brilliant idea to interview some friends who had experienced their son, daughter or both going to college (like I had the best idea in the world, because, umm, I’m pretty sure it hadn’t been done before).

I’ve been sitting on the results for a couple months. Results that really aren’t as dramatic or drastic as I thought they would be. Or surprising.

What I discovered is that boys prefer to just bring three to four pairs of shoes (holes and all), whereas girls will load an extra car full of them (as one friend put it, “enough for a display at Nordstrom”).

As if they might die if they come across an outfit that doesn’t have the perfect shoe to match. And they might. Actually, they probably would based on personal experience.

We should have bought stock in Steve Madden had we known it would be a problem.

In my opinion, college should be about sweatpants and Skippy’s but I didn’t go to college so I suppose my opinion doesn’t really matter here. Although, I did live in concert tees and Adidas in high school so I can’t be that far off.

I learned that girls need to have utensils, matching dish sets and a glass for every occasion.

You know, for those elaborate dinner parties they plan on throwing on the floor of their five foot by five foot dorm room. Chances of the Queen of England showing up is pretty slim, but you never know.

A boy? Oh, a Spork will suffice. Preferably plastic so they don’t have to wash any dishes. For those of you who don’t know what a Spork is, it is an eating utensil that looks like a fork but can be used as a spoon. I’m guessing this is the greatest invention for college boys since, well, condoms (which also happens to be an “essential”).

Girls have their lists drawn up, laminated, and notarized by mid-April.  And their items all bought and organized alphabetically a month prior to their first day of class.

Girls need to take stuffed animals from their youth, photos of every friend from here to Timbuktu, pretty little lights, and stationary. You know, in case they want to write a letter.

Although today’s youth can barely write script and tend to send thank you cards via Facebook, but I digress, and that’s a topic for another time.

Boys are more simplistic. I saw some photos of boys dorm rooms on Facebook and with the exception of one or two, most are fine with a college pendant and their letter from high school football.

Don’t let a girl in there, boys. If given the opportunity, they will fill those blank walls. And fast I’m sure of it.

The long and short of it is that boys focus on functionality and don’t stress out. For girls, it’s all about the decorative touches, and the stress levels are through the roof. Like, duck if you see it coming. Like, “Sybil” crazy stress.

How are they the same?

They both pack snacks. Lots and lots of snacks. Pretty much enough snacks to last nearly four years. And depending on how far or close they are, they packed enough clothes for two to four seasons.

I don’t know why that last sentence surprised me. I thought for sure a sweatshirt would be good enough to get a boy and/or a girl through winter (if my memory serves me right, winter coats were an unnecessary piece of clothing at the school drop off line).

That pretty much sums it up. Girls stress out if they don’t have enough shoes and matching mugs. And boys can get by with crocs and a fork you can eat soup with.

So, for all of you with inquiring minds, who were losing sleep over it, there it is. You know what to expect. Either run for the hills, or accept the idea that you will have to do a lot of hand holding.

Whatever the sex of your child, college is a pretty cool experience. So, take a deep breath and enjoy the ride. It’s over before you know it.