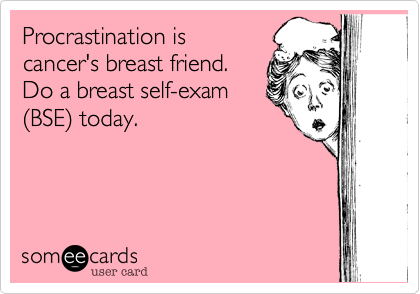 I know it’s not Breast Cancer Awareness Month.  I’m either late or early, however you want to look at it.  But I want to tell you a little story.  About 2 weeks ago, I was sitting on the couch watching television with DH.  It was late.  I was probably recuperating from a long shift from My Retail Job.  My right hand was resting on my left breast.  I’m not one to particularly feel myself up.  It just kinda was resting there.  And I felt a lump.  A huge freaking lump.  Practically sticking out of my skin.

About 2 months ago, I had a mammo AND a follow-up ultrasound.  I get the ultrasound every year because my boobies are cystic.  Our lovely insurance doesn’t pay for it.  But it’s peace of mind for me.  I know she’s pretty far removed, but my mother’s grandmother had breast cancer and would have died of it if a major heart attack hadn’t gotten to her first.

Anyway, I actually didn’t freak.  I didn’t see my life flash before my eyes.  I knew it couldn’t be cancer because I just had the girls squished, pulled and molested by not one, but two strangers.  And cancer just doesn’t grow that fast.  Does it?

I waited about a week and a half before I made my GYN appointment.  I didn’t want to seem like an alarmist.  I was hoping it would go away.  Well, it wasn’t going away.  But I was completely obsessed with feeling it.  Every.Single.Moment.  I knew in my gut that it was nothing.  I was just obsessed with the damn thing.  Like a pimple-on-the-end-of-my-nose kind of obsessed.

The good doc said it was a cyst.  So he prepped a nice big needle, numbed the area and stuck it in.  Nothing.  He did it again.  Nothing.  Completely empty needle thingy.  He seemed pretty surprised.  Then wrote a script for yet another ultrasound.  Joy.  I left his office battered, bruised and maybe a tad bit nervous.  But just a tad.  I’m pretty sure my blood pressure didn’t change or anything.  It was just the hypochondriac in me.

I went for my ultrasound 2 days ago.  It’s a cyst.  In fact, you can see it on my last sonogram from April.  It was teeny tiny.  Then grew.  And grew.  I think the thing is on steroids.  They said it would probably just go away.  My question is do I have to grow another boob to house this thing before it decides to move along?  And, when will it go away?  My bra only holds a “D”.  I may have a problem.

So, check your lady bumps girls.  It’s important.  I’m lucky.  Some are not.  I have friends who have/had breast cancer.  I am not one to give myself a breast exam because I am completely squeamish about those things.  But now I will make it a habit.  Get to know those babies.  And any lump or bump that wasn’t there before and/or feels weird, call your doc.  Just to be sure.  Chances are it’s nothing.  But at least you’ll spend less time being obsessed.  And save the breast exam for once a month instead of every second like I did.  Total time waster, trust me on that one.