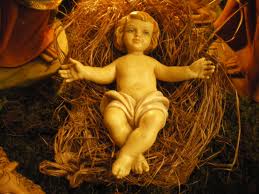 I am not a big fan of organized religion.  But before anyone out there judges me harshly, let me tell you that I AM a big fan of God, Jesus, Mary, Angels and all else Heavenly.  I talk to God all the time.  I am pretty consistent in asking for forgiveness because I happen to screw up on a daily basis.  I’m terrified of pissing off the Big Guy and possibly spending all of eternity down under and I’m not talking about hopping with the kangaroos either.

Every year, I put out the Nativity Scene at Christmas.  The same Nativity Scene I have been putting out for 20 years.  I place it under the tree.  I don’t really know why I put it there.  It’s kind of a pain in the ass for the placement of presents.  And it’s made of glass.  Joseph is missing a hand.  The Shepard is missing part of his staff.  A Wise Man has lost his Myr-cense-a-thingy.  But it goes under the tree because where else would I put it?  On the mantle?  That just makes too much sense.

When The Kid was about 4, she was helping me put it out.  Suddenly, she said, “look mommy, it’s Baby Julia.”  I thought I heard wrong.  So I asked her to repeat it.  Again, she referred to Jesus as “Baby Julia.”  Just to fill you in, “Julia” happened to be my friend’s baby.  I suppose it was the only baby she knew at the time.  And well, you know what I’m getting at.

My overly devout Irish Catholic grandfather probably would have disowned me had he been in the room.  It was at that moment that I realized I had better do something about it.  Because it was also at that moment that I felt like the biggest loser of a mother.  My 4 year old, actually she may even have been 5, didn’t know who the heck Baby Jesus was.  I made the decision right there and then to introduce her to religion.  I wasn’t being a hypocrite.  Well, not completely.  I just wanted her to learn about God and Jesus and all that good stuff.  And she wasn’t getting it from me.  All I could recite was the Adam and Eve story, a little about Noah and that Moses parted the Red Sea.

I think it was a good decision.  She enjoys it.  The church we belong to is pretty cool.  Very relaxed.  No weird rules.  You just go.  And pray.  And learn.  So now, I can say with confidence that my child knows who that dude is in the manger.  My job is done.  Um, that was Moses who parted the Red Sea, right?