“Boujee” according to Urban Dictionary:

“An abbreviation of the French “bourgeois.” A critical term used to describe people, things, and places that are definitively high-class. Something that is affected, inauthentic, gentrified, exclusive, and/or otherwise sheltered from the dirt and grime of the real world.”

The Kid and I recently visited a dear friend of mine (DFOM) and her step-daughter (Say-Say) who have a vacation home in Palm Beach, Florida.

We almost didn’t make it as there was a major snow storm (affectionately known as the “Bomb Cyclone”) heading our way the day of our departure. By the hair of our chinny-chin-chins, we were able to get on the last plane out of dodge a day earlier.

I still have anxiety over it.

I can’t say that Florida was much better in the temperature department. I mean, Iguanas falling out of trees because of the cold can’t be a good thing, right? 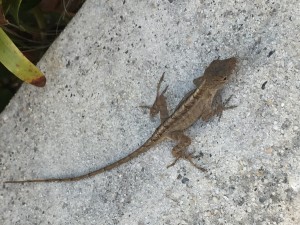 I’m just glad I’m not an iguana. I’m also glad I didn’t get hit by one.

My DFOM owns a beautiful home amongst the mucky-mucks. Something I am not quite accustomed to. The mucky mucks, I mean.

Well, the beautiful home, too.

Anyone who knows me, knows I am a simple girl with a big mouth and a loud sense of humor who can belch with the best of them, and laughs when someone passes gas.

I mean, come on! My favorite Christmas gift this year was the Potty Squatty. Need I say more?

In other words, I am not refined. I’m basically a twelve year old boy stuck in a middle aged body.

Irregardless, I took my fake Louise Vuitton bag and Dress Barn clothes and faked it for all it was worth.

Nothing against sore thumbs, but somehow these people can spot one a mile away. My Dress Barn special and unrefined attitude just don’t make the cut.

Anyway, enough about me and my uncultured ways. Let’s get on with the fun stuff. So, what did we do for six luxurious days?

Read it and weep because I made more offenses than if I farted to the tune of “Homage for Satan” in church.

Wednesday: Got into the airport after midnight. Saw DFOM and Say-Say and ran to their car while it was still moving. Was told I didn’t have any common sense by the nice police officer. Offense #1 by internal 12 year old boy even though external middle-aged body knew better.

Thursday: Turned on the news. Laughed at all the northerners who had hell freezing over on them. Made a drink in an adult sippy cup, bundled up in a long sleeved t-shirt, put on head gear so as not to receive brain trauma from falling iguanas, and hung out at the beach. Forgot to “slough” my heels which was Offense #2. Let’s just say, it brings a whole new meaning to the phrase “well-heeled.”

Friday: Flagler Museum and High Tea. Offense #3: they don’t have wine at High Teas, so don’t ask. Especially when it is clear there is no bar.

Drove down the East coast version of Rodeo Drive called Worth Avenue. Laughed and laughed at all the ladies who spend way too much on face lifts and nail polish.

Oh, went to the Breakers, too. One of The Kid’s bucket list items was visiting the original Lilly Pulitzer store there. She’s boujee. Not sure where she came from.

Saturday: Took a ride along the coastline in the convertible Bentley with the top down. Drove past all the richy-rich houses with Zillow turned on so we could faint with every price tag. 911 really should have been called.

Sat by the pool/beach (pool to the left of me, beach to the right) at one of the many country clubs DFOM belongs to. Got served by a really cute cabana boy who did pretty much anything we asked.

Tried to get Say-Say to ask him out, but she wouldn’t. Youth is wasted on the young. Offense # 4: Snorting while laughing is not looked upon kindly even though it’s a gift of mine. 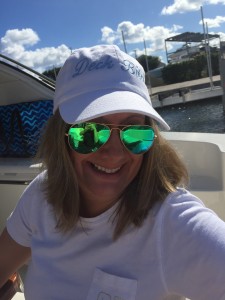 Got driven around by a captain. Offense #5: saying “OMG YOU HAVE A CAPTAIN???!!!” out loud is not proper.

Monday: We slummed it by shopping at the little outlet center near DFOM’s home. Offense #6: there were no offenses made this day. I was in my element. “Slumming” it is what I do best. That, and snorting while I laugh.

Tuesday (day of departure): DFOM and Say-Say took us for brunch at one of their other country clubs, even though we didn’t bring a fancy hat. Offense #7, but really #6: Do not pile plates on top of each other when you are done eating. Also, do not push your plate to the side. Apparently, the rules here are different than at The Red Lobster.

It seems I have much to learn.

To sum things up, we basically spent six days on a Hollywood set, except this was real. Honestly, I kept looking for Alan Funt to tell me to look into the camera.

All in all, it was a great get-away with good friends and a much needed respite. This life may not be for me, but it is fun to visit. I’m not gonna lie.

If we receive an invitation to return next year, I’ll be sure to be more prepared. TJMaxx sells Ralph Lauren.

Is Ralph acceptable in Palm Beach? Asking for a friend.