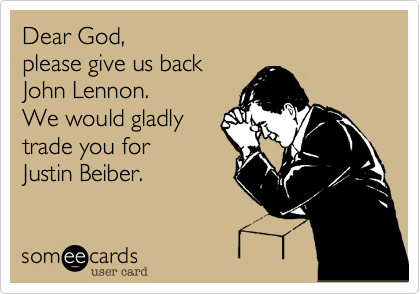 My mom went to a Catholic school as a chid (even though she wasn’t Catholic at the time but that’s a story for another day).  Their priest, Old Monsignor Pierce said that Elvis Presley was evil and ordered the children to go home and smash all of their Elvis records.  I can only pray that some old priest will demand the same for Justin Bieber, Carly Rae Jepsen and Nicki Minaj.  Where’s Monsignor Pierce when you need him?

I know I’m being a little over-dramatic, but every single time I have to listen to this shit when the kid gets in the car with her girlfriends I want to throw myself out of the vehicle — while it’s moving.  I swear the radio plays the same 12 songs.

It’s my opinion that most of the music of today has no substance.  In 20, 30 or even 40 years from now I can guarantee that you won’t hear much of it anywhere.  I can’t see how it will have staying power.  Not like the great music of the past.  (Although I have to admit I have a bit of a crush on Justin Timberlake and Usher but there is an exception to every rule.)

While I’m at it, I have to make a comment about Nicki Manaj.  I cannot understand how someone whose speaking voice sounds like 2 tons of cotton swabs were shoved up her nose can have a good singing voice.  I’m not really an “American Idol” groupie anymore, but if it’s the only thing on, I may watch it for a few minutes.  All I want to do is jump through the TV screen with a box of tissues.  Surely she’s got snot up there from 1994.

And the names?  Chiddy Bang.  I wonder what his favorite movie is.  Flo-Rida.  Let me guess.  He’s from Miami.  LMFOA.  I guess when people stop using text speak, this band will become obsolete as well?

I remember when the kid was into The Jonas Brothers a few years ago.  DH and I set up 3 computers so we could get her concert tickets for her birthday.  We were one of the lucky ones.  6 months later, if you so much as mentioned the name Jonas, she would gag.  And I never hear them on the radio.  Ever.  Where’d they go?  Into the graveyard of has-beens.  Pretty soon we’ll see them appear on a cheesy reality TV show with Cindy from The Brady Bunch.

I’ll tell you what is good music.  Anything by Simon & Garfunkel, The Beatles and Joe Cocker.  And that’s just to name a few.  I could be here all night naming them all.  It’s a tough choice…Led Zeppelin or Miley Cyrus?  Miley!  Yeah right, when the Levee Breaks.