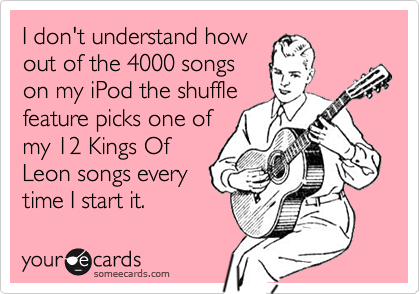 In keeping with the “music” theme, I want to discuss iPods, MP3 players and smart phones. Specifically the shuffle feature.  As you all know (because I’ve made it perfectly clear) I love music.  Not only do I like to sing to it, but I like to listen to it.  While exercising, cleaning the house, driving the car, shopping.  (Shop Rite has some great music.  It does make the act of grocery shopping a bit less painful.  But just a bit.)

I would love to love the shuffle option but I don’t.  The concept is awesome on paper.  I have about 450 songs on my iPhone.  Yet somehow the device plays the same 50 or so.  Actually, I think it’s less than that.  With a random one thrown in there to keep me from bitching.  But mostly the same songs over and over and over again.  I often have to resort to hitting the “next” button a million times before I land on one I haven’t heard in a while.  And when I say “a while” I mean in the last 2 weeks.  When I peruse my playlist there are some great songs that I haven’t heard in ages.  But who wants to sit there and handpick every song?  Ain’t nobody got time for that.

So anyway, I thought it was my phone.  But then the same thing happens on my iPod and MP3 players.  Sometimes I even hear the same song two or three times in one listening session.  So my nice relaxing walk turns into a walk of frustration.  I may love it, but I don’t need to hear “These Boots Are Made for Walking” every 10 minutes.  What it should be is “these boots are made for smashing you to smithereens if you don’t play a damn different song.”  And one I haven’t heard within the last 14 days would be simply divine.  Thank you very much.

So, hear this all you digital music gadgets — you better shape up.  Please don’t make me resort to pulling out my Walkman.  Because I will dig up my old cassette tapes.  And it won’t be pretty. Unless you like Purple Rain.  Damn, Prince sure could rock those heels!