Note: This post has been in the making for nine months, kinda like a baby except it wasn’t baking to perfection. I am just a Self-Proclaimed Procrastinator of the Universe.

As many of you may or may not know, I turned fifty last April. DH is and always has been Numero Uno in the birthday department. He makes it his job to be sure I have the perfect birthday every year.

For my fortieth, he gathered fifty of my closest friends and family and a big boat and we cruised around NY harbor to gaze at Lady Liberty under the stars. How can you outdo that one?

A drink boy would have been nice too, but I do have DH and he is totally nice to look at. Also, he likes to bring me drinks, so he would fit the bill.

My DH does not like traveling so I knew he would be less than thrilled, but it was my birthday wish. And birthday wishes must be fulfilled. It’s a rule. You know, in my rulebook.

After much research and reading every travel site known to man, I chose Providenciales. One of the islands of Turks & Caicos. Also, it was highly recommended by some friends and from my research it is known to have some of the best beaches in the world.

Who am I to turn away from the best beaches in the world? I would keep my toes in the sand my entire life if I could, so going to the best of them was right up my alley.

The Kid wanted to be a part of the festivities, so I chose a week in May after school got out and before she started summer activities. Three weeks before the rainy season begins there.

We rented a private cottage on a private stretch of beach. We could have gone to the other, more commercial side of the island, but in addition to needing a vacation I really needed peace and quiet.

When we disembarked, the heat from the sun was enough to make your skin melt off and the sweat factor was set at 165%. We all arrived in jeans because when we left New York it was chilly. I almost had to resort to scissors to get them off.

Sadly, that was the last of the sun for a week. Just to give you an idea of what we were dealing with, it is said to rain six days a year in Turks & Caicos. We saw four of them.

This is why I don’t play the lottery. My luck is so bad, I would probably owe the lottery people money.

Now don’t get me wrong. Our vacation was very nice. Our little cottage was sweet. Private and quiet just like I wanted with lots of vegetation right outside our back door.

But along with vegetation comes bugs that were on an apocalyptic level. It felt more like we were in a scene out of “Them!” than paradise, so any dreams of sitting on our beach were quickly swept away with the first bite from a sand flea.

Besides the fact that our beach umbrella was used to keep out the rain instead of the sun, we had a lovely time. We were together and healthy so that’s all that mattered.

Until the “healthy” no longer applied.

Let’s just say I used my fair share of toilet paper and my stomach was cramped up in a vice grip from Day Two until well after our vacation was over.

When something disguised as Typhoid or Dengue Fever or parasites hits you like a fast ball at a Yankees game, it could be a vacation wrecker. But who was I to let a little diarrhea keep me from enjoying my vacation? 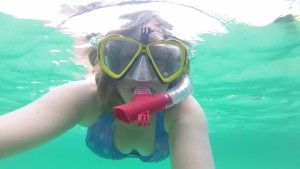 I powered through. I put on my snorkeling gear and spent the better part of our week with the fishies. When you are in the sea, you can’t really feel the rain falling on you. Also, something about the lightness of the water eased my cramping.

Remember I wanted lots of margaritas and rum punch? I may not have had lots of either, but I insisted on ordering a cocktail with my dinner every night whether I was in the mood or not. I swore that is what I wanted to do on vacation and that is what did do dammit.

And I sat on my cabana and watched the sunless sunset and drank a glass of wine from the $30 bottle of swill we bought at the local grocer, because the cost of all things there is astronomical.

All whilst being bitten to death by mammoth sized tropical bugs. But hello? Private cabana on private beach. Bugs or no bugs. It had to be done. If even for ten minutes.

So, I must know. Does something happen to our stomachs when we age? I’m not talking about how it heads south.

That is more obvious than knowing mimosas go with breakfast.

But this same thing happened to me in Ireland a couple years ago. Hmm.

After having testing done of my stool (yes, that was as fun as it sounds) when we hit American soil, all things alarming were dismissed. It looks like it was just a good old fashioned case of Montezuma’s Revenge.

In closing, when life gives you lemons, you add tequila. And Imodium. So, bring it on Monte. I’m ready for our next adventure.

One Reply to “Excuse me sir, do you have anything for the Dengue Fever?”