I have a disease.  It’s called Foot In Mouth.  And there doesn’t seem to be a cure.  I’ve tried everything short of sealing my mouth shut with duct tape.  I’ve made New Year’s Resolutions.  I’ve promised the family.  I’ve promised my friends.  The problem is that my mouth starts jabbering before my brain has time to process anything that comes out of that big, fat hole that lies just below my nose.  There must be a connection issue.  Seriously.  Maybe I should go see a brain doctor.

Every time I open my mouth and say something stupid, it hits me like a ton of shit bricks.  When it’s too late.  I waste more time apologizing for the crap that has escaped from these lips than anything else.  I mean, I could accidentally on purpose rob a bank and possibly feel better about that than what comes out of my mouth.  Possibly.

Let me give you an example.  Last week, I was at a party and talking with a friend who recently went through a divorce.  Know what I decided to say to her?  “I never really liked him anyway.”  Did I stop there?  Nooooo.  Why would I?  I was on a roll.  I followed it up with something like, “He never sat with me right.”  Well, that wasn’t cool.  It just wasn’t.  Besides being with him for a good portion of her life because she probably LOVED and LIKED him, he fathered her children.  As soon as it came out, I regretted it.  I like to blame the wine.  Yeah, that’s it.  It’s the wine’s fault.

I was cringing the entire ride home.  The next day I found myself texting a 2-page long apology.  Basically telling her that I am a complete dumbass and I didn’t deserve her friendship.  Did she mind the comment?  She didn’t seem to.  She didn’t even flinch.  Probably because she knows that my mouth is a completely different entity from the rest of my body.  I have Alien mouth.  My mouth is from Jupiter.

Another example of Foot Mouth?  At a wedding I attended recently, I was trying to get a friend to have a drink with me.  A friend who’s children were in the wedding.  Suddenly, one of her kids wanted to sit on her lap.  Because he was tired.  And wanted his mommy.  When you are a mother of a teenager, that world is a complete bygone.  Another life.  A far distant memory.  What did I say to her?  “Gawd, don’t you wish you could have left them home????”  WTF is wrong with me?  The Kid was in a wedding when she was a little girl and I LOVED having her there.  That time I like to say it was the Cosmo talking.  Blame the Cosmo.  Maybe it was plural.  Cosmos.

Again.  Cringe.  I am still cringing over that one.  My face is starting to just look like one big cringe.  You know when you cross your eyes and your mother tells you they will get stuck like that if you do it too much?  Yeah, well.  There you go.

Oh, there are SO many stories that sound very similar to the two above.  But I don’t really have the time to get into it.  And besides, I don’t want to scare away all the friends I still have left.  Just for the record, I don’t mean to sound so callous.  It just comes out that way.  I most definitely don’t have a way with words.

So, the next time you see me around town, and I look like this: 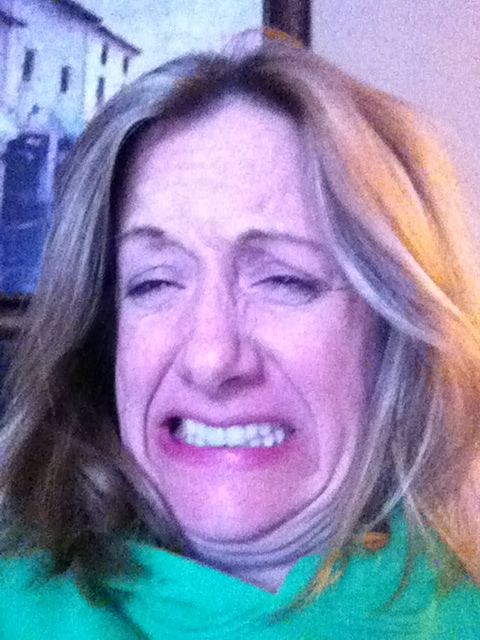 Don’t worry.  It’s my new look.  Because after all, mother is always right.  Now, if I could only figure out how to do that without looking like I have 3 chins…