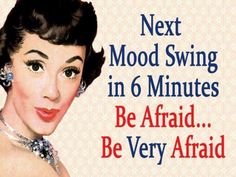 I woke up in a bad mood this morning. A real bad mood. Even the text to my mother was full of venom. I’m pretty sure she was praying. Thanking the good Lord that she was 639.59 miles away. Safely tucked away in the sweet plains of The South.

I don’t know why I woke up this way. I just did. It happens. So, when I told The Kid to empty the dishwasher, she replied through gritted teeth with a “PLEEEASSSE???” You know, the kind of “please” you say to your two year old when she demands a lollipop.

This was probably not the best day to get snarky on me. Peri-menopausal women are a force to be reckoned with. “Force” as in an Uzi With A Vagina. But what does she know? She’s only 16. So much to learn. Poor thing.

What was my reply? “I don’t think so, child. This is your chore. Why I feel the need to remind you to do your chore is beyond me. So no, I will NOT SAY PLEASE!”

When she was done with her chore, I told her she had an attitude and that I didn’t like it. “Mom, can I say something to you?” she asked.

The previous night I was at the high school for a seminar. It was about drug awareness. Three kids from our town came to speak about their drug and alcohol addictions. A child professional got up and spoke for a bit. One of the things he said is to listen to your child. Never dismiss her.

Usually when I am in this type of foul mood, I would say something really stupid and completely against what all child development people would recommend saying. They would not only cringe at my reaction, but would probably have my kid in some kind of therapy for the next 20 years.

When I am in this mood, it would sound something like this: “no, you can’t say anything because whatever you say right now will not help you. Now go upstairs and get ready for school.” But I didn’t. I stopped and I thought before I spoke. I know, this is a shocker. My mouth is usually louder and faster than my brain.

“Yes, you may.” I nearly had a heart attack at my own reaction. “Mom, why is it every time YOU’RE in a bad mood, we have to suffer?” I looked around for DH. So sure he was hiding in the shadows with a $20 bill.

I was rendered speechless. This is the second “attack” I’ve had from my family in a week. I use the word “attack” loosely. It was more like an awakening. The first time, when we were in the car going somewhere, it was what I like to refer to as a “come to Jesus” meeting. Except I’m the only one who didn’t get the memo. “We think you are going through menopause and we don’t like it. You’ve kind of been mean lately.”

They were as nice as they could be about it. But I sit here thinking about these occurrences. Yes, I have been pretty bitchy around here. Not always. I’m not one of those raging lunatics who should probably be committed. But I have my moments. Perhaps a little more than less lately.

And I know why. Sure, hormones play a part in it. I was born hormonal. You should have seen me as a teen. Think Regan without the complete head turn. Damned as I tried, I could only get my head to go 3/4 of the way around.

I haven’t been taking care of myself as well as I should. I stopped exercising. Exercise plays a huge part in feeling good. It’s got something to do with endorphins. Endorphins are your best friend. But I digress.

Whatever the reason, it’s not a good enough one to treat the people you love the most in this world the worst. No, I seem to save my best mood for everyone else. Friends, strangers, people who I try too hard with.

So, in my eye-opening last two weeks, I’ve decided that I need to lighten up on the closest people to me — my family. I can still be great to my friends. Kind to strangers. Civil to everyone else.

I’m going to save my good energy for my people. The people who, even though I act like Sybil at times, still love me back and never give up on me. Even in my peri-menopausal semi-crazed rage.

With that being said, we are still allowed to get upset with our children when they don’t listen. When they don’t do what we ask them to do. Perhaps I don’t need to spit blood, but I can be a little exasperated. And I’ll try to keep the Regan to a minimum. I promise.

4 Replies to “Hormones vs. Hormones”