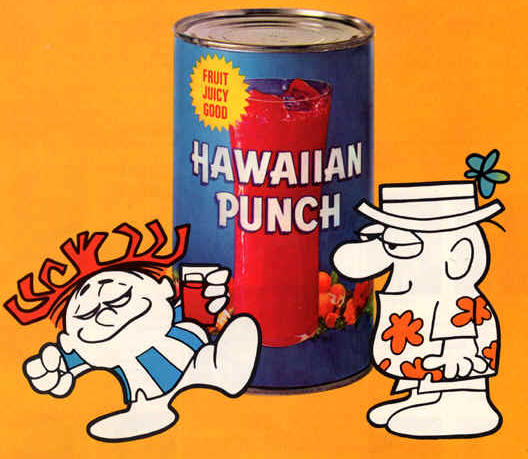 This story is not about me exactly.  But since I told you a little about my brothers earlier this week, I thought you might enjoy this story.  Literally I could write a novel just based on the stunts they pulled.

I’m going to guess that the year was about 1977’ish.  My youngest brother Mark was assigned to bring in 2 cans of Hawaiian Punch for a class party.  You remember the type where you had to puncture two holes with a can opener into each end of the top so the juice would flow easily?  The big 46 ounce cans?  Those.

On the day of the party, Mark forgetfully left them at home.  After school that day, he panicked and asked our brother Ed for help.  There were plenty of ways to remedy the situation.  Flush down the toilet, pour in the sink, dump into the backyard.  My wiseass middle bro told my baby bro that he would have to drink both cans to hide the evidence.  After all, mom spent her hard earned money and time so he could have a nice class party.  He was totally being selfish.  So Mark did as he was told.  He drank both cans.

At the time, the boys shared a room and slept in bunkbeds.  Mark in the top one.  In the middle of the night, Mark woke up with stomach pains.  He put his head over the edge to wake up Ed.  Ed in turn, put his head out to look up at Mark.  Ed got hit with 92 ounces of red regurgitated punch.

Karma is most certainly a bitch.  You just never know when she’s going to come to get you.  In this case the big brother got to take a bath in her.  Lesson learned?  Of course not.  Like a said.  A novel.

2 Replies to “How About a Nice Hawaiian Punch?”