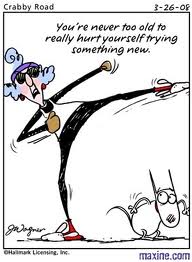 I have never had a real injury in my life.  I’ve scraped a knee from falling, because I’m a klutz.  I’ve bumped my head by forgetting to duck while entering my car, because I’m forgetful.  I’ve burned myself on the oven rack because, well, I’m an idiot and didn’t use a potholder.  But I have never had an injury that is incurred by being an athlete.  Because I never did a sport in my life (except track team, age 14, one season).  Sure, I did aerobics in the 80’s, but who didn’t?  And besides, that doesn’t count.  It was more about who had the cutest thong with matching scrunchy socks.

I received a text the other day from a friend who is also a runner, among other things.  She’s been really working it to get into shape.  She’s about my age.  She was diagnosed with bursitis.  Bursitis!  Probably because she has been weight training.  The poor girl.  All she’s guilty of is trying to sculpt her body.  Because she wants to be healthy.  And look good.  Like me.  So when we go through menopause, we can be ahead of the game and avoid that ugly meno-gut.  That damn ugly meno-gut.

About 2 months into running, I started experiencing pain in my left knee.  It hurt a little.  But I still ran.  No biggy.  Then I injured it at work.  And still ran.  Then I stopped running for a day or two because it hurt.  Then I slipped on water in the kitchen and twisted that mo-fo knee.  Then I went for a run after a couple of days of rest. Then I tripped on something at My Retail Job.  Now the stupid thing just hurts.  All the time.

I went to the orthopedic guy the other day.  To get to the bottom of this situation.  I need an MRI because the x-rays can’t see a damn thing.  Thanks for the shot of radiation for no reason, doc.  Then he said some nonsense about it possibly being a torn meniscus or something along those lines.  I stopped listening when I heard “meniscus.”   Just so you know, they don’t repair themselves.  All the “resting” in the world will not help.

So, I started riding my bike.  My big, fat mountain bike.  On the road.  The one with cobwebs and a gear shift that gets stuck.  The one that literally hasn’t been used since 1997.  But it’s exercise.  Because I’ll be damned if I let a little ripped meniscus stop me from taking care of myself.  And gaining 25 pounds back.  No freaking way.  I would rather eat cow poo while swinging from a 46 foot high tree limb.  Ain’t happening.  And just so you know, I’m going running with my Bursitis friend this week.  Screw you meniscus.  Screw you Bursitis.  Try to stop us.