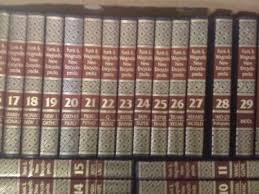 Remember when we were kids and we had to do a “research” paper on George Washington?  You ran to the living room shelf in hopes that your mom bought enough groceries that week to score the W-Z of the Funk & Wagnall Encyclopedia set so you could read up on the old goat.  It took her a year to acquire the entire set.  Only for it to be obsolete by the end of 7th grade.  We had to eat a lot of spaghetti and sloppy joe’s to stay updated.

Basically everyone in your class turned in the same paper.  Plagiarism wasn’t allowed back then either, so we took the most important facts from the 5 paragraphs we had available to us, flipped the words around and wrote something down.  If we were lucky, either mom drove us or we rode our bikes over to the library for a little more in-depth research.  Those lucky kids received an automatic “A.”

Technology today definitely has its pros and cons.  One pro is that our kids have the world at their fingertips when it comes to research.  We get to save on gas by not having to drive them across town to the library.  If I didn’t have our weekly jaunt to the library when the kid was little, I’m not sure she would even know how the place works.  Remember the Dewey Decimal System?  I believe that is as defunct as the free grocery store encyclopedia.

Another pro about technology is when we are able to settle a bet.   I can’t tell you how many times I’ve had a disagreement with DH about who that special guest star is on a rerun of “Charlie’s Angels.”  And putting an end to the argument in a matter of seconds with the flick of some fingers.  It’s awesome.

What I absolutely do not like about today’s technology is our lack of privacy.  News about one person can travel faster than Road Runner on speed.  It’s also not so good if you are trying to self-diagnose yourself.  Once I was sure I had Barrett’s Esophagus when really I just had too many jalapenos in my tacos.  Just stick to a real doctor.  Chances are you are going to live.

That’s basically how I feel about it all in a nutshell.  Okay, I gotta go.  I have to go Tweet about what I’m doing right now.  Oh, and Facebook some photos of myself.