A few weeks ago I took a Barre class with a good friend of mine. This Barre class really was of no interest to me.

Because I’m embarrassed to say that the most exercise I’ve had in the last couple years has been random walks around the block with the dog, and twenty (really fifteen) minutes on the elliptical at the gym during my “I’m going to get healthy” phase that lasted all of two weeks.

So, how did I get roped into this Barre class thing, you ask?

The Kid and I were spending the weekend with a friend and her step-daughter. Every Saturday morning they take a Barre class. Who were we to stand between these ladies and their routine?

Besides, I soon found out that pretty much death is the only thing that could come between my friend and her Barre class.

So we scheduled a class for the next morning. Bright and early.

On a weekend. When I was supposed to be sleeping late, drinking cocktails, catching up with my friend and doing nothing. Let me repeat…doing NOTHING (all caps, bolded and italicized in case you didn’t quite get the gist).

Anyway, when the two young’uns woke up with liquid coming out of both ends due to eating a bowl of bad Acai berries, I thought we would be off the hook. In fact, I was pretty sure we were. You know, off the hook.

Remember I said only death would come between my friend and her Barre class?

I supposed if two food poisoned-stricken young ladies could muster up the energy to sit (sit really isn’t the correct word here) through a fifty minute Barre class, then so could I.

Upon our arrival, I warned the cute little class instructor that I was going to look like a complete jackass to which she replied, “oh, you’ll be fine.”

She soon discovered the joke was on her.

If you have never been to a Barre class (Is this even a proper noun? Is it really deserving of capitalization?), the room looks like a long and narrow torture chamber. With mirrors lining one entire wall so that you can watch yourself looking like the complete jackass you claimed you are (I certainly didn’t want to disappoint anyone).

Oh, and there are bars. Or Barres. Running up and down two walls. The kind of bars you would find in a ballet studio.

Except this was no ballet class. Not that I’m saying ballet is any easier. But I was in a room with ballet bars. I mean, why?

The instructor had us do some stretches. I think. I’ve blocked some of it out. I’m sure my brain went into protection mode.

You may think I’m being a tad dramatic, but I’m not. It was bad. And it hurt. It hurt in places that I didn’t even know existed.

During the first three minutes, I discovered that I could no longer touch my toes. The last time I couldn’t touch my toes, I was nine months pregnant. That should tell you something.

Apparently, the purpose of Barre class (there goes that capitalization again) is, and I quote, “to perform multi-directional dynamic movements to target different muscle groups simultaneously.”

Well, let me assure you that there were muscle groups in my body that were in a deep hibernating state since 2014 and they were none too happy with me.

It brings a whole new meaning to the phrase, “…a long winter’s nap,” don’t ‘cha think?

After correcting me seventeen times in the first twenty minutes, the instructor shrugged her shoulders and gave up.

There was not one move I could accomplish. I stood/sat/died there for most of the class, with my eyes averted. Looking on the ground pretending an earring dropped out of my ear.

And I don’t wear earrings.

I kept peeking around the room to see if I had a partner in crime. Someone I could be in cahoots with. Someone who was struggling like I was because, as the saying goes, “misery loves company,” and that expression could not have been more true during this fifty minutes of hell.

But nope, I was the only jackass in class. Everyone looked like they knew what they were doing and doing it well.

Even the food-poisoned young ladies. 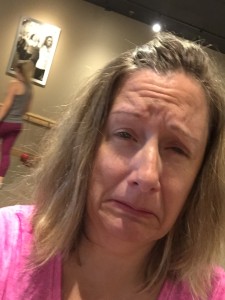 After sweating through class, with my heart pounding so hard I was concerned the paramedics were going to be called, I realized one thing:

I am out of shape.

And not just out of shape. My body is completely deplete of any shape at all.

I am a fifty-year old woman whose body is that of a seventy-year old (I apologize to all you seventy-year old women right now, because you probably still look and feel better than I do but if I put the number any higher, I will most likely drop dead of a stroke from the thought of it).

When I get out of bed in the morning, it takes a good five minutes to warm up. My back hurts, every bone pops, and forget about my knees. Those babies are shot and are in dire need of a repair.

I can no longer sit on the floor. If I do, I resemble one of those baby elephants trying to get a feel for standing except the baby elephant has a higher success rate.

After I prayed hard for the class to end, it finally did. I glared at my friend and pretty much threatened her life. “NEVER AGAIN,” I proclaimed for the entire class to hear.

The instructor actually breathed a big sigh of relief.

There was one benefit to this class. And that is I realized how badly I need to make some changes.

If I don’t start moving my ass, I am not going to be in good shape by the end of the decade. I mean, even worse than I am now. And that scares the hell out of me.

How in the world did I let myself go? Four years ago I was running five miles three to four times a week. I could run circles around most of the young people I knew. I was thirty pounds lighter, fit, tone, and best of all I felt amazing.

I’m just a fifty-year old woman stuck in a seventy-year old body who can’t do Barre class without looking like a walrus trying to scratch his own back.

I don’t really know what that means, but believe me it can’t be pretty.

Cheers to healthier days. Maybe next time you see me, I will look less like zoo animals, and more like a woman in the prime of her life.

2 Replies to “No Hold Barres Ever Again”