I left off by telling you that I was missing my “long form” birth certificate (if you missed it click here). How was I going to get it? I was going to have to beg, borrow and steal, that’s how. Or just write a check.

I was born in New Jersey. Which means that I had to apply to the State of New Jersey Vital Statistics. I applied on February 14 and had to pay $47 to get something that belongs to me. But I guess that’s my punishment for forgetting to put the original back in the safety box. Either that or that is some expensive paper right there.

After receiving emails informing me of my birth certificate’s every step (Confirmation, In Progress, Ready To Mail Out and Completed), I finally received it on March 18.

I now had 16 days until we leave for our trip. My laid-back, “eh, we have plenty of time” attitude turned into full-on panic. I looked online (thank you Internet for being born — just don’t lose your b.c.) and found the number for the nearest Passport Office, which happens to only be an hour away.

Everything was automated. And I was told by Roberta Robot to come in on March 25 at 9:30am for my appointment. Now, when they say “appointment” I pictured a nice lady in a business suit behind a desk with a bun in her hair and black rimmed glasses on her face. I would sit down at her desk and she would ask me questions that I may or may not be able to answer and we’d be done.

I’m not really sure what world I live in.

Just so you know, in order to get a Passport expedited, you have to pay an additional 60 bucks. So far I am $232+ in the hole. Add in my time and wear and tear on my car and fuhgetaboutit.

After waiting in line to get through the metal detector and finding out that I needed to fill out yet another form, I had to get in line #2. This line had one of those rope things you see when you want to catch a ride on Magic Mountain. Except without the magic. And the mountain.

There were three windows but only one was open. A family of seven was at the single window. I was pretty sure they were ready to bust out some wine and cheese because it looked like they were going to be there for a while.

I was sandwiched between two guys. One had so much dog hair on the back of his sweatshirt that I was afraid to inhale too deeply for fear of getting a hairball and the other was mumbling, “this is bullshit” to himself over and over again. I was half expecting him to go “postal” any minute.

After standing in line for 40 minutes, I was given a ticket with a number and had to go wait in the pen with the rest of the poor passport-less people. The only difference is, I already had a processing passport. So, I had a different number than most everyone else. I just had to show the powers that be my $47 birth certificate. Easy peasy.

I sat down at 10:17. My number was called at 11:11. I almost missed it because I was texting DH, bitching about my experience and that I had a fear of not hearing my number being called.

By chance I looked up from my phone and a guy behind one of the six out of twelve windows that was opened was staring at me. Glaring at me like I was a sixteen year old girl. I wish I could say I was flattered, but I wasn’t.

I gathered my crap and ran up before he gave my spot away. After explaining the whole deal, he said, “give me a few minutes to find your paperwork. Sit where I can see you.”

Even though it only took him a couple of minutes and I was sitting in a chair right outside of his little window like he told me to, he started looking around the room for me. I ran up again, before he gave up and moved on to the next soul.

Because the thought of starting over made me want to just throw in the towel. So what if I never leave the country ever again? Who cares if I never see the Eiffel Tower? Or the Taj Mahal? Or Tahiti?

I got out my check, ready to sign over the extra 60 buckaroos to get my passport lickety-split. “Oh, no. You don’t owe any money. We are so sorry.” Yes. He apologized to me. Why? In case you missed it, in Part I I mentioned that the birth certificate I originally sent did indeed have my parents’ names on it. See where I’m going with this?

So now I’m only out $172+ (the “+” is for the processing fee that I don’t remember the cost of). The guy behind one of the six out of twelve opened windows asked me if I wanted it overnighted. Believe it or not, I said no. Because it was going to cost $15 and I’m dirt cheap. He promised me it would be at my house in three business days. He was wrong. 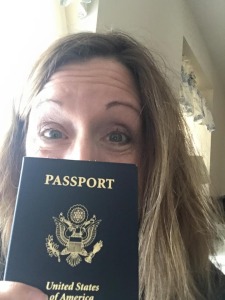 Moral of the story? Make sure you have a passport. You don’t have to have current travel plans outside of the United States. Just have one. Getting a passport because you have to, last minute, is not a good idea. Or as fun as Magic Mountain.

Plus now, you can go to Tahiti.