It’s safe to say that I grew up with a fairly unconventional mother. Sure, she was young. 21 when she had me. That was still the generation when women were getting married out of high school and popping out babies pretty much as they were saying “I do.”

So, she wasn’t the only young mother on the block. Still, when I think of all my friends’ mothers, mine was pretty much one of a kind. You can take that either way. There is no right or wrong answer by the way.

She was very much unlike her own mother who was a complete kook. You know, making shit up like “you only get three orgasms in your lifetime, so be careful how you use them.”

Doing things like sniffing the crotch of her only daughter’s underwear to see if she could detect the scent of semen (this coming from a woman who only had 3 orgasms in her lifetime? How she could differentiate between semen and hollandaise sauce is beyond me).

Running into an old friend at a wake and yelling out across the room, “HEY AGNES, I HAVEN’T SEEN YOU SINCE OUR TWATS WERE FACING EACH OTHER IN THE DELIVERY ROOM!!”

Ok, so that last one was a little reminiscent of something my mother would do. And she once told me someone died in my childhood bedroom. But other than that, nothing alike. Just had to get that in. Maybe one day I’ll tell you other reasons why I not only believe this, but know this. It’s a good story.

At the age of 10, my mother turned to me. In front of my entire family. In the living room. On a commercial break. During the “The Waltons.” And said, “please make sure you come tell me when you are ready for sex and I’ll get you on birth control.”

Say what and come again? I’m 10, mom. Please. Now if you don’t mind I would like to finish brushing Barbie’s hair. She’s getting ready for the ball. Ken is taking her (umm, to the ball, not uh..well, you know). Ooh, I think I get it now. Sorry, a little slow on the uptake.

So, I asked my mom when I got home. After all, I wasn’t afraid to. She said I could talk to her about anything. “Hey mom, what’s a blow job?”

“Oh honey. I have something I’ve been saving for you,” was her reply. She left the kitchen only to come back holding a book a few moments later. Oh great, she was going to give me a reading assignment.

This was back in the day when I would scan the pages of “Black Beauty” and brag about how great the book was. When I say “scan” I mean wave it in front of my face like one of those Japanese fans they hand out in church on a hot day.

What was this book she wanted me to so desperately read? “Forever” by Judy Blume. I heard of Judy Blume. She was that children’s writer. What the hell was she giving me a kid’s book for? “Here, read this. Come to me with any questions you have.” 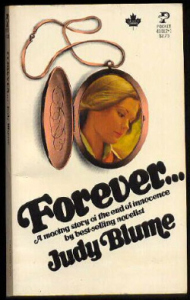 Judy Blume? This was different. It just was. Probably because I didn’t visually see anything that permanently scarred the insides of my eyeballs.

So, that was pretty much my sex talk. I’m sure mom told me about fallopian tubes and periods and how babies grew. But I don’t remember. All that comes back to me when I think about the mother/daughter all-important coming-of-age discussion is Katherine.

Rock on Katherine. That does not mean I give permission for The Kid to ever act out in this way before she’s, what? 29? Pfft. That’s silly. I am very hip after all. And totally contemporary. 28 would be completely acceptable.