“Actually this isn’t an emergency really. The smoke detector which is also a CO detector went off in the basement a couple of times and I was wondering if you could send someone over to test the air?”

“Yes, I’ll send someone right over. In the meantime, do not open any doors or windows and get everyone out of the house.”

Me running through the house: OMG EVERYONE GET OUT OF THE HOUSE NOOOOOOWWWWWWW!!!

Yes, that’s me. In full-on panic mode because I run on two emotions: “Panic” and “Over-reaction.”

The Kid wasn’t home at the time, so DH, me, and the dog went outside to step to the curb. It was hot and I had to put on a bra so I was a little less than happy. I’m not sure if I brushed my teeth, but I was certain that I hadn’t brushed my hair. The nest that was met by a run through with my fingers told me I hadn’t.

I had taken the day off so my offspring and I could spend some time together gallivanting in the city that never sleeps. I was unshowered and had stuff to do to get ready.

This wasn’t in the schedule and there was no time for it. When my over-reaction emotion kicked in, I was certain our plans would have to change.

You know, because a fire/CO detector went off in the basement. The world was coming to an end as I knew it. We would be forced to vacate our property while the good team of First Responders would traipse through our home to eradicate the carbon monoxide that would surely have killed us had I not called “911” when I did.

I clearly saved our lives.

When I saw a utility pick-up truck-type vehicle pull up to the front of the house, I was relieved to see they didn’t send out the calvary to embarrass us in front of the entire neighborhood.

But I was a little too premature in my relief. Within minutes, there was a large fire truck, several more utility pick-up truck-type vehicles, and a couple of cars lining the street in front of our house. The scene was looking like Firehouse Family Safety Day hosted by Yours Truly.

Donned with full-on Bunker Gear, our wonderful local First Responders entered our home with carbon monoxide detectors ablaze. After about three minutes, the man who seemed to be in charge approached me.

Man In Charge: Ma’am, did you burn anything this morning?

Me: Well, yes, actually, I did. I made an egg and it dripped on the stovetop and caused quite a mess. How did you know?

Man In Charge: Ma’am, that is what caused the smoke detector to go off in the basement. Not carbon monoxide. I could smell it when I walked in the house.

Me: But how can that be? That’s all the way in the basement! Also, this happened a couple weeks ago, too! I swear the culprit can’t be just an egg!

I don’t remember his reply except for a “shake my head” type of response and a hint that perhaps we need to replace the alarms in our home. But yes, I was trying to argue away my embarrassment with a highly qualified member of the local fire department.

As nuts as it sounds, I was hoping for a little more drama so that I could report back to all my friends, family, and co-workers about how we almost died.

Thank you, First Responders. You really are truly amazing.

Also, you’re welcome. Surely, I must have been the laughing stock back at the firehouse. 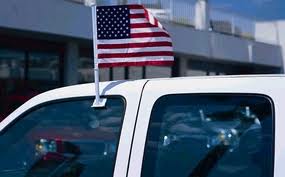 It was a Tuesday.  It was The Kid’s first day of pre-school.  She was 3.  I remember being in my car, backing out of my garage to drop her off for her big day.  The news was on because, unbeknownst to me, the news was on everywhere.  A plane had hit Tower 1 of the World Trade Center.  At first, the reporter said it was a small plane.  I immediately had visions of a Cessna.  Then I thought it was a joke.  I thought of the “War of the Worlds” radio program of 1938.  I remember just laughing it off.  Think about it.  How could it be possible?  This was stuff that only happens in the movies.

Except this wasn’t a movie.  By the time I pulled into the parking lot of the school, I knew it wasn’t a joke.  At this point, it was confirmed that it was indeed happening and that it wasn’t a Cessna.  Other mothers were standing in small groups throughout the schoolhouse lot.  I remember trying to put on a brave face for our children.  Our sweet, little, innocent children.  This was history in the making.  To be a chapter in their history books just a few short years from that moment.

We all rushed to our homes to call our loved ones and to sit in front of CNN for days.  And days.  Lines were tied up.  Air traffic was stopped.  Everything was quiet.  It was surreal.  We all ran out to buy flags for our car windows.  We all came together in crisis.  We loved one another.  I remember a deep peace among our neighbors.  There were no honking horns because someone sat at a light a nanosecond too long.  There was no anger.  Anywhere.  For a long time.

As I sit here writing this post, I am watching footage of that day.  All those feelings I had 12 years ago come rushing back.  My heart still hurts to remember.  The dread, the tears, the complete sense of loss and helplessness.  It has affected all of us this way.  We will never forget.  We are a changed nation.  Our children live in a different world.

Tonight, I pause to remember that day, to pray, to hope for a better future.  Tonight, I remember how we came together as one.  Tonight, as always, I am proud to be an American.