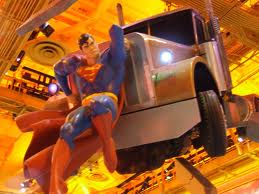 It was a beautiful morning in the summer of 1988.  I was driving to work.  My music was blasting (I’m guessing that may be part of the reason why I now have permanent ringing in my ears).  The windows were down.  All was good with the world.  Until I tried to merge onto I-287 and was met with an 18-wheeler.  Literally.

Ok, so it wasn’t my fault.  Right?  I mean, I had my blinker on.  So what if I was driving a little 2-door Honda CRX.  It was red.  The guy should have seen me and moved out of the way.  He didn’t.  He hit me instead.  Then decided to try and make a get-away.  Yeah, right.  Nice try buddy.

So, I did what every 100-pound 20 year old young woman should do.  I got out of my car.  In the middle of the lane.  In rush hour traffic on a major highway.  And I stood there with my hand up, screaming obscenities.  Picture Superman trying to stop traffic with his super powers.  Well, without the obscenities.  Except I didn’t have any super powers.  I was cute.  Sometimes that worked for me.  But not this time.  The trucker looked at me like I had 2 heads.  I know he thought I was nuts.  In retrospect, I was.

This was in the day before everyone had a “car phone.”  My future sister-in-law saw me standing there looking like a lunatic.  She was 2 lanes over and couldn’t get to me.  Like I said, it was during major rush hour traffic.  Outside of a city.  And she’s not an idiot.  When she got to work she called my future DH.

I was a damsel in distress.  Except I was gone by the time future DH got there.  Remember those SOS trucks that used to drive up and down the highways looking to help stranded drivers?  One of those guys stopped and basically told me to move along.  As for the truck driver, he did NOT think I was very cute.  Not at all.  I don’t know how it ends.  I can’t remember.  No one was hurt or arrested so all must have gone well.  My car even survived.

So, you know when I complain after working at My Retail Job for 7.5 hours on my feet the entire time and feeling like I got hit by a Mack truck?  I literally know the feeling.  Because I was hit by one.  How many people can say that?