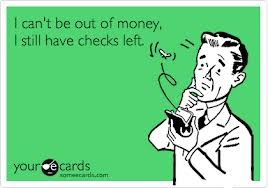 I could not wait to graduate high school. I had it all planned out. No college. Good paying job. Apartment. In that order.

I did get a job. I landed a job with a large corporation making 15 thousand dollars a year. I remember being so damn proud of that 15 thousand dollars that I actually contacted my shorthand teacher from high school and told her like it was the biggest news since the invention of the toaster.

And then the credit union told me I could open my own credit card. I COULD HAVE MY OWN CREDIT CARD, PEOPLE! I screamed it from the rooftops. And then I ran to the mall.

Let’s just say that there is nothing worse than trying to buy a 75 cent pack of gum and having the store clerk cut up your credit card before your very eyes because you have reached the limit. Three months after you receive it.

Then, I got checks. A whole, entire checkbook full of them. You know that expression, “I can’t be out of money, I still have checks left?” That was me. My checks bounced more than a Super Ball. I’m surprised the feds didn’t come after me.

Then I met a man. This man not only never bounced a check in his entire life. But he never racked up even a dime’s worth of credit card debt. And he still hasn’t 28 years later. How do I know? Because I married him.

It makes him crazy. The way I spend money. Give me 10 bucks and I’ll have it spent before you leave the room. I don’t know how. It’s a talent I have. Seriously. You’d be amazed. I probably should get my own show in Vegas.

Anyway, back to what I wanted to talk about. What was it again? Oh, right. My early life plan.

Why did I fail? Because I didn’t have any money. Because the credit union gave a 19-year-old baby-faced girl a credit card with a $2,500 credit limit and a book full of checks.

I sometimes regret my errant ways. Sometimes I do. I mean, I do okay now. Because I have DH. He keeps me on the straight and narrow.

He takes care of the bills. I did take them over once but I accidentally wrote an extra zero on the end of our mortgage payment. Yeah, that went over about as well as a fart in an elevator. But, it was a good way to get out of that chore.

Also, when you vacuum? Bang into all the wood furniture. It’s a sure way to get rid of that chore too.

See how devious I am? I amaze even myself. That, my friends, is the best advice I could give a new bride. Dent the furniture. It works. Skip the sex talk on their wedding day, teach your daughter how to get out of household chores. She’ll thank you later.

Whoa, did I ever digress there. Phew. Sorry, I’m into a couple of glasses of Prosecco.

Anyway, I think my point is that young girls (and boys, but since I’m not a boy, I can’t really speak for them) everywhere should really be careful with their finances. If you aren’t smart about it early on, it could potentially be a life-long problem.

But damn, did I have the best wardrobe ever when I was 20. Unfortunately, that $30 dollar shirt was more like $180 by the time I paid it off. Interest. It’s called interest. The credit union forgot to tell me about that. Or maybe they did. I also had a problem with listening.

Still, I was pretty cute in that shirt.

What’s the lesson here? Stick to your plan, don’t spend too much money and if you have checks left? It doesn’t necessarily mean you have money in there. Check the balance. That is, if you kept a balance. Then you’re screwed.