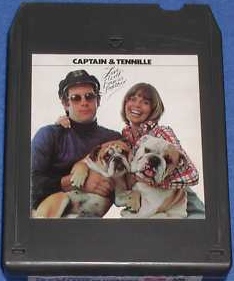 When I was a kid, I was absolutely in love with The Captain and Tennille.  I’m talking, if my mom or dad didn’t insert their “Love Will Keep Us Together” tape into the 8-track player in their car every single time I was a passenger, I would have pouted, cried or screamed.

My favorite song was “You Better Shop Around.” I don’t know why. I hadn’t the slightest idea what the heck it meant. I was 8. Shop around for what? New sneakers, Colorforms (which, by the way, I always, always wanted but never got)? Like I said, I was 8. Why would I ever imagine that your mother would be telling you to shop around for a man? And if you had told me that? I never would have guessed that you can buy a man in a store.

Another song that I adored was “American Pie.” Still one of my favorites. I can listen to the lyrics today and because someone told me what the song meant once upon a time, I understand it. Kind of, because although it is possibly one of the best tribute songs ever written, it’s still a little hard to decipher.

But when I was a kid I thought Don was saying “good old boys drinking whiskey and wine.” Because I heard of whiskey, but never heard of rye and if someone said to me, “hey Mo, they aren’t saying wine, they are saying RYE,” I would have thought they were dumb because you can’t drink rye. That’s a kind of bread.

Also, when they drove their Chevy to the levee? I pictured a large parking lot with a burger stand in the middle of it. The levee was dry?  Pfft. It was a sunny day. I had it all figured out.

Oh, so fun to reminisce. But did you know that The Captain and Tennille recently divorced? When I heard this, I had to know the reason because inquiring minds want to know and also I was a little devastated and needed closure.

In a nutshell, The Captain has Parkinsons and it has interfered with his keyboard playing so Toni left him. I’m not so sure I believe that. I mean, I did read it in the online People edition though. If it’s true, then I have this message for Ms. Tennille: Hey woman, love will not keep you together. You need to write a new song.

This was a writing prompt from Mama Kat’s Writer’s Workshop: A song you loved when you were younger but now listen to the words…