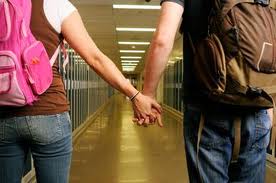 Just when I didn’t think there could be any way I could feel older, I found a way. Or, actually, the way found me. “What is this way so I can avoid it,” you ask? It’s called, “Your Kid Gets a Boyfriend (or Girlfriend).”

Forget the crows feet and the laugh lines. Forget the creaking bones and the pee that leaks out of you every time you move. Forget the droopy eyelids and the gray hairs. Yeah, that’s got nothing on the boyfriend thing.

I knew it was coming. We always thought she was too young to date before, but she’s 16 now. Short of locking a chastity belt to her and triple padlocking the door to her room, we knew we’d have to let go. And the time to let go has come.

Now, for those of you who have yet to go through it, let me explain a couple of things. Because quite apparently, I’m stuck in the prehistoric age. Just call me Wilma. I had to get educated. You know, learn the lingo.

First, they were a “thing.” Actually, I think they were friends and then a “thing.” The friend bit I understand. No problem. Glad they did that before they got to the 3rd stage. I said 3rd stage, not 3rd base. **shudder** Get your ears cleaned. (Yes, I know what 3rd base is, kid. I wasn’t born yesterday.)

A “thing” sounds kinda weird, but I learned that it’s better than “hooking up.” No, no. You don’t want your daughter (or son) to hook up with anyone. I’m pretty sure “hooking up” means exchanging more than just spit in the bodily fluids department. But with no commitment.

But a “thing” is the stage between friendship and dating, or going out. From what I can gather a “thing” means you like each other more than friends but are not ready to start dating yet. Just to clarify, there is no hanky-panky. From what I’m told.

Dating and going out. I remember those words from my era. I mean, I don’t much remember dating itself because let’s face it, that was an eternity ago. You know, when we used rocks to open coconuts and well, rocks to do anything because that’s all we had. That and twigs.

So, why does this make me feel old? Because dang, people, it just does. I mean, my baby is growing up. She’s got a boyfriend. She’s probably going to start kissing this boyfriend. I have the feeling that this kissing is not the same as giving air kisses to her little friend Jimmy in the ball pit when she was 2. Besides, I was 16 once. Also, I’m not dead.

But, I will not be handing my old 1984 copy of “Forever” to her. She will not be learning about sex from Katherine and Michael.

No, our sex talk will go something like this…”so, once upon a time, there was this nice boy and this nice girl and they got married. The end.” Now, if that won’t scare away her new boyfriend, I don’t know what will.

I jest. He’s a very nice boy. I completely approve. Still, don’t move too fast buddy. I’ve got eyes all over town including the one in the back of my head. Be afraid. Be very afraid.

Also, you two should talk on the phone. Like, the real phone. The one connected to the land. Because the one thing that would make me really, super double approve, is if you make me feel young again. So, please. Tie up the phone lines. It would make my day. 1984 style. But without “the book.”