The Kid is a Girl Scout. She has been since she was an adorable little Daisy at 5 years old. She used to LOVE the Girl Scouts. She’s 16 now and of course, she isn’t in love like she used to be. She’s hanging in there though because she only has another year left and let’s face it…it looks good on the dreaded college resume.

It is GS cookie time. It has been for over a week but I keep forgetting. Somehow the job of selling cookies always lands on my shoulders. She used to love going door to door (with me, of course) up and down the neighborhood streets. Asking people to support her troop.

She also wanted the cheesy awards you got if you met certain goals. You know those awards that probably didn’t cost more than 50 cents to make in some third world country? Totally worth it.

When she was old enough to start selling cookies, her form would be practically full. Now? There’s so much white space you can write an entire novel on it.

Anyway, I forgot about the cookies until someone posted something on Facebook about them. So, I wrote this status on my wall:

“Aww crap. I keep forgetting it’s Girl Scout cookie time. Ugh. If anyone wants any, let me know. But you have to be within driving distance because getting them to people is a major pain in my ass and after over 10 years of this I’m kinda done. How’s that for customer service? Lol! (sssh, don’t tell our troop leader…). But I will gladly place an order for you with a smile!! xoxo”

Yeah, I know it was snarky. I know my friends are going to say I’m being mean and bitchy. Maybe I was a little rough. But I’m not kidding when I say I’m done. You don’t even need to put a fork in me to tell. It’s obvious because I have the appearance of a piece of chicken that was left out on the barby for too long.

Girl Scouts is an absolutely awesome organization. I don’t regret for one minute, the day I signed up my little angel. She has learned about respect and commitment. She has formed great friendships. She can pop up a mean tent and make chicken parmesan out of a cardboard box oven that would rival that of Martha Stewart’s.

But anyone who knows me, knows that I am not a lover of volunteering. And it pretty much takes a village to run a troop. Yes, her leader is awesome and does 99% of the work (thank you Miss K. You have literally helped raise my child, I am forever grateful to you) but I believe I have paid my dues. Both figuratively and literally.

Years of being cookie mom, running magazine drives, filling out those address books so your troop can have an extra $2 added to the account, having to be a chaperone at meetings, encampments, field trips. The f*cking permission slips for every dang thing. My hand a throbbing hot mess after writing out multiple forms in a row. I swear it takes an hour for the blood to start circulating again.

After being involved in the Girl Scouts for almost 12 years, I am tired. I will give to the poor, I will volunteer my time at the soup kitchen, I will make coffee for the parishioners at church. But please don’t ask me to sell one more god darn Girl Scout cookie. I just can’t do it anymore.

So, who wants some? We have Trefoils, Do-si-dos, Thin Mints…. 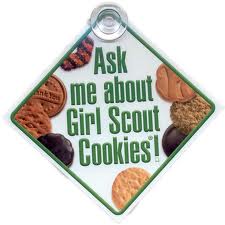 And I’m not talking about Christmas either.  The kid has been a member of the Girls Scouts since 2003.  I love the good ole’ Girl Scouts.  I talk them up every chance I get.  My daughter has learned so much from being a GS.  She can light a fire (I mean camp, and she better keep it that way), she can pitch a tent, she is a master crafter, she has learned respect.  And last but not least, she can make new friends AND keep the old.

One thing she is not good at…selling GS Cookies. Nope, somehow that has become MY job.  What happened to the days of those cute little girl scouts going door to door?  Perhaps it was the realization that there are perverts and child molesters lurking about.

Yup, so in order to keep her safe, I took over the job.  Her leader (God bless her, I don’t know how she does it…in other words, better her than me.) would like for each of them to have a goal of 50 boxes sold.  Sure right okay, as soon as I charter that first flight to Mars.

Look, I know people SAY they look forward to GS cookie time, but do they really?  I have been asking, begging, promising favors in return, for my friends, family, coworkers to buy for years.

It’s for a good cause.  Yes, you can freeze them.  No, you don’t have to pay now.  You’re on a diet?  Well you can donate cookies to the food pantry because they are so nutritious.  My personal favorite complaint: “but they are $3.50 everywhere else.”

So, every year, I moan, groan and bitch when I see that blasted cookie order form and start on my quest to fill the orders.