This week’s writing prompt is brought to you (or me) by Mama Kat’s Writer’s Workshop. She wants me to describe what I did this Labor Day. So, here you go:

Labor Day weekend, to me, starts on Friday and runs all the way up through Monday (of course). I don’t usually work Fridays but I did last week because I traded one of my other days. Because something must have come up. Another of many millions of perks of My Job.

The Kid had field hockey practice until 4:30. Then Driver’s Ed until 8. So, I had to sit and behave and not have any wine because, well, drinking and driving don’t mix ever. But most especially if you have a kid that you need to pick up.

Friday. No score. No party. No fun. Damn kids.

Saturday was better. We had two parties on the calendar. The first one was an annual event thrown by good friends of ours. It’s always sure to be a great time, we can count on that. The host with the most at this annual party always serves pineapple infused vodka. I’ll get back to that in a minute.

The second one was a themed party. A “Redneck” party thrown by my brother-in-law and sister-in-law. This is also turning into an annual affair. Again, another great time.

Now getting back to the pineapple infused vodka. It’s delicious. And dangerous. I started out at the friend’s party drinking 2 glasses (maybe 3…okay 3) of the vodka. After about 5 hours we left there to go to my in-law’s party.

At that party, I drank two glasses of wine (no pineapple vodka because they didn’t have it, a blessing in disguise. They did have margaritas, my favorite, but I steered clear of them because vodka and tequila? Probably a “NO”). We stayed at this party for about 3 hours, then left to go home to our beddie-bye.

It’s late. I think I’m tired. On the way home, I get a text (or did I text her? Hmm.) from my friend with the vodka letting us know that they are still partying and if we’d like to come back.

Hells yes, of course. I am not one to turn away from a good time. Ever. I show up in my Redneck attire and guess what’s waiting for me? A nice cold glass of pineapple infused vodka. Also, it turns out I’m not tired at all suddenly.

I do not have one, but two more of these glasses of pineapple infused vodka for my enjoyment and everyone else’s because by now I’m three sheets to the wind (whatever the hell that means) and I’m at my best in the comedic sense, according to me. It’s a good thing I kept my clothes on.

Actually, I’m not known for doing that when I’ve had a few too many. Pee my pants? Snort a little? Dance up on a table or two? Say a little too much about just about anything? Sure. But the clothes, they always stay on. Pinky swear. But I may subject my peeps to something like this:

The night was a blur after — count ’em — 7 cups or something of alcoholic beverages in as little as 12 hours. Oh wait, that’s not so bad. That’s less than a drink an hour. And just so you know, I drank plenty of water in the in-between. In between what? Who knows. I just did. This I remember. Let’s just say I tried to pace myself. I really did.

Sunday was a day spent with The Kid watching old classics like The Breakfast Club (my fave) and Mean Girls (hers). It was a good thing too, because I needed the couch pillows to keep my head from spinning.

Sunday. I could say “bust” but it wasn’t totally because I spent it with my daughter watching movies. I ate nothing because a spinning head makes a girl nauseous. And I went to bed at 7pm. So let’s just call it a partial bust.

Monday. The actual day of no-Labor. Eh, let’s just say it was kind of a bust. I was still feeling a little funky (not horribly bad, I mean I could have mustered up the energy to do something, but glad I didn’t). There was a chance of rain, so we didn’t go on the boat. DH kept saying stuff like, “let’s do something” but then we didn’t because, well, I was still a little dizzy to think of anything and so was he I guess. Well, not dizzy. Just…I don’t know. I can’t answer that.

He did make a trip out to Kentucky Fried Chicken and came back with an extra treat called A Dozen Donuts. So, we ate our sorrows (or my sorrows for having too may pineapple vodkas that is not really juice even though it tastes like it) and I gained about a pound and a half past what I probably lost from not eating the day before.

Was the weight gain from the vodka? Maybe. But it was more likely the fried chicken, jelly donut and whatever went down the hatch on Saturday before the big spin. But it was good and it was fun and I don’t regret it. Except at my age, I really can’t hold my liquor like I used to. This I know to be fact.

So, there you have it.  Hope you all enjoyed your Labor Day. See you next year. Same place, same time, same freakin’ pineapple infused vodka I’m sure. Except next time I’ll only have 2 glasses. Maybe 3. Okay 4. Damn, do I love that stuff.

I love hotels.  No really.  I do.  I don’t know if it’s because someone makes my bed or because I can call room service when I get hungry.  I just love them.  I love the smell of the soap.  I love the fluffy pillows and down comforters.  I know.  I’m weird.  DH would much rather chew off his own arm than stay in a hotel, so we don’t do it often.

When my annual scrapbooking retreat comes up, I’m so delighted.  No laundry, no cleaning, no cooking.  And I get to stay in a hotel.

I’m not a picky hotel-stayer.  I don’t mind the humming of the A/C or the sound of the elevator shaft, or the noise of the ice machine.  I don’t even mind if there are people skipping, running or beat boxing down the hall.  But staying in a hotel does have its risks.

I shared a room with 3 friends.  2 to a bed.  That doesn’t bother me.  My bed-mate was a good friend from high school so she’s seen it all.  After scrapbooking all day and late into the night, we returned to our room completely exhausted, I just wanted to go to sleep.  And I did.  It was wonderful until about 2:00am when a large bang woke me.  Followed by plenty more of the same.  What the hell?  Is someone irish dancing on the ceiling?

I sat up and listened for a minute only to hear Deep Purple’s “Smoke on the Water” really, really loud.  And it seemed to be stuck on the same verse.  With the bass turned to it’s deepest.  Then the sound of laughter.  Deep, man laughter.  Lots-of-men-laughter.  I was patiently waiting for the sounds to wake my roommates.  What the hell did these girls take before going to bed?  Ambien with a side of whiskey?

I waited for what seemed like an eternity for the noise to stop.  Surely, these men were raised properly and not by wolves.  Surely, they would realize the error of their ways.  Every expletive was running through my head.  I think I was in complete disbelief.

Anyone who knows me knows I’m pretty laid-back.  In fact, I can be a bit passive.  I don’t like to cause a scene and I don’t like a confrontation.  But my patience had just about worn thin.  So I got out my iPhone flashlight and made my way across the room to find the hotel phone.  In my hoarse voice, I shouted at the poor front desk woman that the party above my head needed to stop immediately.  Her reply?  “I guess you are trying to sleep, huh?”  No.  Actually.  Not really.  I like being a ball buster at 2am for no reason whatsoever.  She was very nice. I was just pissed off.  Sorry for the ‘tude front desk lady.

Of course, the sound of my voice woke my roommates.  Finally.  They weren’t too happy that I woke them.  They didn’t know what the fuss was all about.  Are you kidding me?  I am not known for having good hearing. DH and the kid are constantly telling me I am deaf.  But come on.  If I can practically make out the words to their conversation, surely even the hotel across the street can hear these clowns.

It took about 5 minutes, but the noise finally stopped.  I mean, really stopped.  Dead.  In it’s tracks.   I wonder what the front desk chick told them?  “Yo dudes, if you don’t stop the party the wacko lady downstairs is going to pretty much go postal on you so let this be your only warning.”  I like the thought that these tough grown men could have possibly been a little bit afraid of me.

The next morning at breakfast, I looked over every single man that walked in.  I believe I found them.  They looked something like this: 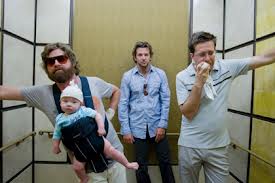 I knew I had my men.  They sure were lucky I wasn’t in the mood to pick a fight.  Next time, it won’t be so pretty.