When DH and I got married twenty-four years ago, we didn’t have a formal honeymoon. We couldn’t afford one because four months earlier we decided to spend the money we saved for our wedding as a down payment on a house.

Good idea? I think so. A house lasts way more than a five hour wedding and is the smartest thing a young couple can do, but I digress. (FYI – we were lucky because our parents helped foot the bill for the reception, which was awesome by the way)

In other words, we were house poor.

After the last guest left our wedding reception, DH looked over at me and said, “wanna go to Cape Cod for a few days? We can use some of our wedding money to pay for it.”

Of course, who am I to turn down a spontaneous vacation? I am not a planner by nature so this fit my personality to a “T.”

We didn’t have the internet to help us, so we basically got up the next day, threw a packed suitcase in the trunk of our car, and with map in hand, drove the three hours or so it took to get to the Cape. We hoped there would be hotels with vacancies. If not, there was always the car.

The first night we chose a sketchy looking “hotel” that was right off the main road on the Cape. It was one of those one-level motor inns. I’m sure our little stay didn’t cost more than $50.

The floor was uneven (when I say “uneven” I mean there should have been a railing installed on the wall to hold on to so guests wouldn’t run the risk of falling and injuring themselves), the bedding…umm, let’s just say the Red Light District has seen better linens. And I believe I saw a cockroach scurry across the bathroom floor.

We got better at choosing places to stay each evening during the week, with ants replacing cockroaches. And polyester blend replacing plain, old polyester.

We laughed it off and filed the experience away in our memory banks under “Shit Not To Do.”

This past weekend was our anniversary. DH wanted to look at a motorcycle that was for sale on Long Island so we decided to turn it into an impromptu weekend getaway. This time we had about forty-eight hours to (somewhat) plan it out.

Unfortunately, everyone else had the same idea. We couldn’t find a single hotel room anywhere.

Except one. And we soon understood why. Suddenly the memory of that first night on our honeymoon came rushing back (what good is a memory bank when you only deposit but never withdrawal).

When we pulled into the parking lot, we noticed the sign right away. It was a throw-back from another era.

Inside the tiny lobby, there were model cars of Thunderbirds and Corvettes. The furniture had a bit of an old, retro feel to it as well, and the clerk was dressed in a costume from the 1950s.

I looked at the girl and said, “oh, so this place is supposed to make you feel like you’ve stepped back in time on purpose.”

Except we suspected that perhaps it was just an excuse to not do any kind of renovation at all. You know, since 1956.

After we checked in, she informed us that breakfast was from 7-10am. Awesome. We asked where it would be served.

DH and I looked behind us. “Umm, here?” Yes, here. There probably was enough room for approximately 4.5 people to stand comfortably in the lobby but whatever works. 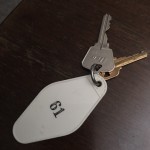 After we made our way up the “rustic” (aka RUSTY) set of stairs that led to the upper balcony, we located the door to our room and opened it with a real key.

The room was a bit old all right but no “retro” furniture to be found. Our suspicions were starting to prove correct. 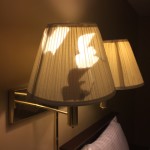 Aside from the peeling paint on the wall and broken lampshades hanging above the bed, the sink in the bathroom was clogged and water stood to the rim.

DH called the nice 1950’s lady and she apologized and ran a new key up to us for the room two doors down.

Room #2 wasn’t perfect either, but surprisingly it smelled clean. And it was a place to lay our head for the night. This time around we were too old to have the option of sleeping in the car. So, it would have to do.

I walked over to the window to check out the view of the parking lot, and noticed two tiny ants crawling around on the sill. I gave them a little smack and decided I would keep that little tidbit under my hat. No need to upset the mister.

“What did you just hit?” he asked.

That little ant turned into about 300 within five nanoseconds. Apparently I disturbed the nest when I tried to kill their brother.

Without giving it a second thought, we picked up our bags and headed for the lobby. When the 1950s girl saw us, she took a deep breath and said, “oh no, what’s the matter now?”

I love hotels.  No really.  I do.  I don’t know if it’s because someone makes my bed or because I can call room service when I get hungry.  I just love them.  I love the smell of the soap.  I love the fluffy pillows and down comforters.  I know.  I’m weird.  DH would much rather chew off his own arm than stay in a hotel, so we don’t do it often.

When my annual scrapbooking retreat comes up, I’m so delighted.  No laundry, no cleaning, no cooking.  And I get to stay in a hotel.

I’m not a picky hotel-stayer.  I don’t mind the humming of the A/C or the sound of the elevator shaft, or the noise of the ice machine.  I don’t even mind if there are people skipping, running or beat boxing down the hall.  But staying in a hotel does have its risks.

I shared a room with 3 friends.  2 to a bed.  That doesn’t bother me.  My bed-mate was a good friend from high school so she’s seen it all.  After scrapbooking all day and late into the night, we returned to our room completely exhausted, I just wanted to go to sleep.  And I did.  It was wonderful until about 2:00am when a large bang woke me.  Followed by plenty more of the same.  What the hell?  Is someone irish dancing on the ceiling?

I sat up and listened for a minute only to hear Deep Purple’s “Smoke on the Water” really, really loud.  And it seemed to be stuck on the same verse.  With the bass turned to it’s deepest.  Then the sound of laughter.  Deep, man laughter.  Lots-of-men-laughter.  I was patiently waiting for the sounds to wake my roommates.  What the hell did these girls take before going to bed?  Ambien with a side of whiskey?

I waited for what seemed like an eternity for the noise to stop.  Surely, these men were raised properly and not by wolves.  Surely, they would realize the error of their ways.  Every expletive was running through my head.  I think I was in complete disbelief.

Anyone who knows me knows I’m pretty laid-back.  In fact, I can be a bit passive.  I don’t like to cause a scene and I don’t like a confrontation.  But my patience had just about worn thin.  So I got out my iPhone flashlight and made my way across the room to find the hotel phone.  In my hoarse voice, I shouted at the poor front desk woman that the party above my head needed to stop immediately.  Her reply?  “I guess you are trying to sleep, huh?”  No.  Actually.  Not really.  I like being a ball buster at 2am for no reason whatsoever.  She was very nice. I was just pissed off.  Sorry for the ‘tude front desk lady.

Of course, the sound of my voice woke my roommates.  Finally.  They weren’t too happy that I woke them.  They didn’t know what the fuss was all about.  Are you kidding me?  I am not known for having good hearing. DH and the kid are constantly telling me I am deaf.  But come on.  If I can practically make out the words to their conversation, surely even the hotel across the street can hear these clowns.

It took about 5 minutes, but the noise finally stopped.  I mean, really stopped.  Dead.  In it’s tracks.   I wonder what the front desk chick told them?  “Yo dudes, if you don’t stop the party the wacko lady downstairs is going to pretty much go postal on you so let this be your only warning.”  I like the thought that these tough grown men could have possibly been a little bit afraid of me.

The next morning at breakfast, I looked over every single man that walked in.  I believe I found them.  They looked something like this:

I knew I had my men.  They sure were lucky I wasn’t in the mood to pick a fight.  Next time, it won’t be so pretty.