This morning I was futzing along. Getting some laundry done. Straightening up the kitchen from the breakfast mess. Making some beds. You know, like I said, futzing along. Not a care in the world.

At 8:23am I was thinking about the other things I needed or wanted to get done. There is a difference you know. The need vs. want thing. But let’s talk about that another time.

I decided to take a quick look on my trusty iPhone calendar because even though I didn’t think I had anything on the agenda (besides some things I needed and wanted to do), I probably should make sure.

My eyes went wide and I shot up to a standing position. I did one of those back and forth circular motion panic things that you do when you aren’t quite sure what to do. I probably resembled Yosamite Sam on speed. Or Popeye. Or well, just me.

I had seven…count ’em…SEVEN minutes to get to my annual gyno and mammogram appointment. An appointment I’ve had since January. Holy shit. Anyone who knows me, knows that I am punctual to a fault. And if I am late, I can blame my family for that. Seriously. It’s usually their fault.

Anyway, a quick call to the office and a fast explanation about how I suffer from the periodic Brain Fart and how it’s a problem I should probably have checked out (too bad I couldn’t get a 3-in-1 deal but this is a doctor for down below although it seems my brains were where the sun don’t shine this morning so maybe?), the nice receptionist lady said “hurry up.”

But I wasn’t showered. There is no way in hell I am going to lay back on a gurney with my legs hiked up spread eagle without a shower. There are things you know? Like possible dingle berries and well, things. Amiright?

I grabbed a wash cloth and a towel from the linen closet and busted my ass, really only paying any attention to all that is between my belly button and upper thighs. Anything else that may have been left behind was just going to have to be a surprise.

Seven (because seven is my lucky number today) minutes later I was backing out of my driveway. My hair was unbrushed, my legs were hairy and I was without a stitch of makeup. I had the same clothes on from yesterday because who had time to decide that? But I changed my underwear because my mother raised me right.

Twenty minutes later and a half hour late, I walked into my appointment. They took me right away and I had all of the above mentioned done (except the Brain Fart check-up). My heart slowed down, I was safe. Phew. That was hairy. Well, so were my legs so who cares?

I rushed to this appointment only to find out that I have lost an entire inch, I have gained 23 pounds and was told I should probably go have a colonoscopy. Because what? I wasn’t accosted enough? Just what I need. I have truly hit mid-life. I’m going back to bed. And no. That is not on my calendar. 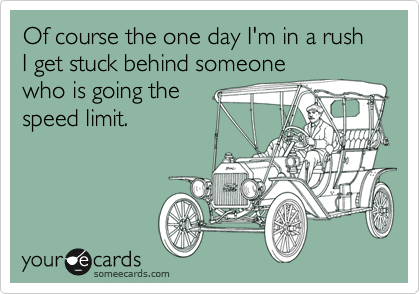 I try to be punctual. I really do.  If I’m meeting the girls for a drink, dinner or a movie, I’m consistently on time. Sometimes even a bit early.

For some reason, I can’t seem to be on time for something really important. Like a doctor’s appointment. As you know, the other day I was seeing a new eye doctor because of that weird dotty thing that showed up on an X-ray.

Before I left for my appointment, DH asked me to stop by the bank to make a deposit. Sure I’m going by there anyway. The only problem is that the customer at the drive-up window is taking forever.  Then after what seems like an eternity, I see the little drawer pop out of the window.  Oh, thank God.  I was just starting to get that irritating tingling feeling I get when I start to lose it.  But then the chick in the car sits there for what seems like minutes. Freaking hell.  MOVE.IT.ALONG.

Then I get on the highway.  So we had a blizzard that dumped 2 feet of snow on us. Get over it. That was three days ago. Then we had a little frozen rain last night. So what?  Look if you can’t handle a little ice, you probably should stay home. People who drive the speed limit in the fast lane really ought to be ashamed of themselves.

Then there’s the person at the light.  Where does it say “No Right on Red?”  NO WHERE THAT’S WHERE!  Good golly people. At this point, I’m screaming every obscenity known to man thinking this moron is going to hear me.  That’s right, put your foot on that little pedal down there that makes your car go forward.  It’s real easy.

On the way home I felt so much more relaxed. I’m in no rush.  And I’m relieved I only have a freckle.  It’s such a nice feeling.  Wait a minute.  Why is this guy up my ass?  Geez. Some people.