This wasn’t our first time here. Apparently it was our fourth, although I only remember three. It came highly recommended by a dear friend some time ago.

On this day, we stopped by on our way to a vineyard in Litchfield (Sunset Meadow — I highly recommend it). It was our last full day before The Kid came home from her mission trip so we wanted to get in another date.

The White Horse Country Pub is good. It’s a decent place that seems to be reliable. It sits along this body of water they call a river but looks more like a creek on steroids.

There are two outside patios, one off the restaurant area and one off the bar. The patios sit looking out over the river and is beautiful. The setting is tranquil.

There is a tall wooden wall that separates the diners from the parking lot and busy Rte 202. There are a few of those hot lamp things that keep you warm on cool days/evenings and a string of large bulbs hang from above. It looks like a great place to eat at night.

Inside, the restaurant and pub is rustic. It’s a very quaint and fun atmosphere. The bar in the tavern is large and a big fireplace sits opposite it.

Any time I have gone by this place, the parking lot is full. It doesn’t seem to matter what time of day it is. Good sign, right? Perhaps. 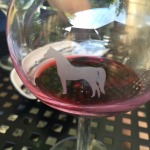 Everything seems to have their logo/name branded/stamped/etched into the sides. Wine glasses, beer mugs, pottery that holds bread. It’s very charming.  Just so you know, they give a generous pour of wine. Almost to the rim.

We were seated outside on the patio off the restaurant next to an older couple. They both had huge buckets of seafood in front of them. I looked and looked on the menu but couldn’t find it. When our server came over (great service, by the way), I pointed to the couple and asked what that was.

“Oh, they must be regulars. That meal is only served at dinner, but I’m sure the chef will make it for you.”

It is called the WHITE HORSE SEAFOOD BAKE and it consists of shrimp, clams, mussels, calimari, salmon, corn, onion, potatoes in a white wine sauce. I thought he said something about some kind of licorice liqueur but I didn’t taste it.

It is served in a huge iron pot and a piece of branded pottery containing garlic bread accompanies it. He warned me that it was a lot of food for one person but I figured if two people who are at least 20 years older than I am can do it, so can I.

DH ordered the BLT. A sandwich made of apple smoked bacon, fried tomato, greens and chipotle mayo on a baguette. This is served with a side of french fries.

It took a long time for our order to come. Probably because of my meal, I’m sure. I really don’t mind waiting for a meal as long as the company is good and I have a full glass of wine, to which I had both.

When my food was finally placed in front of me, I thought “this is no problem, there isn’t much food here.” I quickly learned I was mistaken.

It was a damn bottomless pit. It was steaming hot, the heat being held in from the iron pot. I am not a fan of extremely hot food. I had to take a sip of water after each bite. I did burn my tongue. Several times. It was difficult to eat because although they do give you a galvanized steel bucket to put all your shells into, I really could have used a plate to dissect everything.

Everytime I dropped a piece of the seafood into the pot, the liquid would splash up and burn my neck or stain my clothes (even though it was a white wine sauce, there were tomatoes in there). I would highly recommend asking for a bib.

The mussels and clams were steamed almost perfectly. The salmon was thoroughly cooked, which is good for this situation. They could have been a little more generous with the potatoes, but they were so hot anyway, I had a hard time eating them.

After a very long time, so long that DH ordered a cocktail after he was finished with his meal (he thought his sandwich was okay…but remember, Mr. Picky), I was done. I’ll have to remember to take a bite out of everything he orders, so I can pass on my findings. Be patient with me, I’m learning.

I finished the entire pot. And the broth was still steaming. I was full but was I satisfied? Eh. It was okay. I won’t order it again. I had to really work at my meal. I don’t really like to work that hard for a meal, unless it’s lobster. And I wasn’t impressed with the broth it sat in. It wasn’t bad, it just wasn’t to die for. I did not have a foodgasm.

The wine was average and DH’s cosmo wasn’t that great. It’s a pub though. I’m sure they have a great beer list, but I’m not a beer drinker and DH really doesn’t love beer either so there you have it.

If you go to their site, you will see all of the awards they have won. Lots and lots of awards. An entire page dedicated to their awards. So, you probably really can’t go wrong.

I would go back again because of the atmosphere. The other items on the menu seem like they would be reliable and something you can count on being at least good.

I really want to go back for a burger. Their menu is quite extensive and there is something for everyone. Including the picky eaters in your family.

Also, it’s really quite affordable. I didn’t ask for the price of the seafood bake beforehand, but DH made a comment about how this lunch would probably be more expensive than the last lunch we had ($150? I didn’t agree). We placed bets. I said my meal alone was $25. He thought it would be more than $50. We had three drinks (2 wines, 1 cocktail), no dessert and no appetizer.

The meal was about $56, with tip $67. My crockpot was only $21 (I won). It was a really great value for what I got. Overall, it was pricey for lunch, but that’s not a fair statement because if I ordered the burger, it would have been much more reasonable. Also, it’s probably not necessary to have two glasses of wine at lunch. But we’re talking about me here.

The meal was decent, I didn’t love it, I wouldn’t order it again, it was a lot of work. But, you may feel differently so don’t not get it on my account. That will totally make me feel bad.

Oh and by the way, when new people sat down at the table next to us, they wanted what I was having. Except the server said they can’t make any more and that it’s really for dinner. So, if you want that, go at dinnertime. I got lucky, I guess. Or not. I probably would have been happier with a cheeseburger.