I am at an all time high in the weight department.

I had never really had a problem with weight. When I was in high school, I could eat my lunch, all my friends’ leftovers, go home and eat Steak-umm sandwiches and Twinkies washed down with cherry Kool-Aid and still only weigh ninety-eight pounds soaking wet.

Well, it seems those days are gone.

I can no longer eat Twinkies — it turns out there isn’t a food group for chemicals anyway.

Why can’t I eat them? You know, aside from the fact that they are made of ingredients that are virtually unpronounceable, and umm, soap?

Because now they just take a detour to sit on my stomach, upper arms, and anywhere else they are not welcome.

Practically everyone I know is on Weight Watchers. I have always avoided the big WW or any other kind of weight loss program. I’ve always been in the camp of “just eat right and exercise” and you will be able to lose weight.

Just over four years ago I did just that. I lost thirty pounds. I took up running and I journaled every single morsel of anything I put in my mouth.

I ran. The one thing I declared that I would never, ever do. Yet, I fell for it. Hard. I loved it. But it didn’t love me back. After a short few months into my new hobby, my meniscus tore in two places.

After my surgery, I would cry tears of frustration whenever I would pass a runner. Aside from step class in the late eighties, running is the only exercise I actually enjoyed.

Anyway, I was in the best shape of my life. It took me a year to take off the weight, and a mere months to put it all back on, plus an extra five pounds for good measure.

Do you know how hard it is to lose weight once you hit fifty? Also, something happens to your middle. It grows and well, sags. It gets in the way of doing simple daily tasks. You all know what I’m talking about.

So, I kind of joined Weight Watchers. No, I do not go to meetings. Meetings have never been my thing. I have the app on my iPhone and I have been following it for almost a month now. They actually have pretty good recipes. DH is also on Weight Watchers, he just doesn’t know it.

And I’m down four pounds.

The point of my blog post here is to say that I ate. I ate a lot. I always ate way more than DH does. The way I piled food on my plate, you’d think it was my last meal. Or that food was going to go out of fashion. Or a shortage was coming. Or an apocalyptic event.

I’m not talking vegetables and boiled chicken either. If I had a hankering for a plate of nachos, I would make some. I would stop into a McDonald’s on a whim. Not smart for someone who has struggled with genetically high cholesterol since 1986. Don’t lecture me. I know. My doctor is none too thrilled either.

When I started WW four weeks ago, I would bet I cut down my intake of

food by a pound or two a day. Seriously. If I had a scale and actually weighed what I ate, I would be able to prove it to you.

For now, you’ll have to settle with eye-witnesses who can corroborate my story. And there are a lot of them so take your pick.

Oh, and I also cut back on my wine intake. Like, A LOT. You’d think I would have lost a ton of weight in the first week just based on the sheer volume of wine I no longer throw back.

I eat so many vegetables now, my nose is starting to twitch. And I haven’t even had so much as

one ounce of red meat in thirty days.

I’m not saying losing a pound a week is bad. It’s a good and healthy way of losing weight. Slow and steady wins the race, right? I’m just saying, well, you know, I’m just surprised given what I’ve stopped ingesting.

Since I can’t run, I am having a difficult time getting back into the swing of exercising. Because, let’s be honest here. Exercising kind of sucks. I can always find other things that I’d rather be doing with my time.

You know, like swim with piranhas. And I can’t even swim.

The excuses I have for not going to the gym (which is FREE and three floors down from my desk at WORK), would impress even the Generation Z set.

So, I’m going to start up at the gym again. Also, I downloaded an app where they guarantee you will lose weight if you do what they tell you to do for seven minutes a day. So far, I haven’t opened it. Part of me is afraid of what will be required of me. You know, like moving. If apps could collect dust, I fear it most likely would start to resemble the elliptical in the spare room in no time.

So here I am, about day thirty. I’ll keep you posted. Hopefully, you won’t find me binge eating at the local McDonald’s. If you do, look the other way.

No, not a groupIE — a rock band following floozy.  But a groupER — a bottom feeding fish.  That’s how I like to describe myself these days.  I believe that is one of the reasons why I have gained a bale of hay…55 pounds…since this: 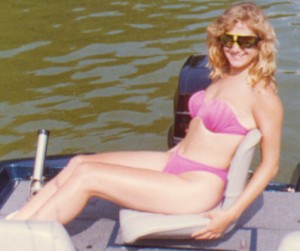 DH, the kid and I went to a local BBQ place for lunch over the weekend.  This is what we ordered:

There was this left over:

DH hates leftovers.  They pretty much repulse him.  Me?  There are starving children in Ethiopia and I cannot, will not, throw anything away.  Well, unless it starts to look like a science project and even then I have a problem with it.

So against hubby’s wishes I told the server to wrap it all up.  That was Saturday.  Yesterday was Monday.  DH tried to toss out my leftovers twice but I caught him and threatened bodily harm.

So I ate this for lunch to save it’s life: 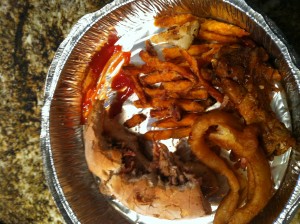 Even though I wasn’t hungry.  If I didn’t, it would go into the garbage and I couldn’t live with myself.  I guess that explains why I look like this now: