I didn’t hear the word “episiotomy” until I was a young adult. I guess my mother never deemed it necessary to discuss the topic. Even though it kind of falls under the whole sex talk category.

I mean, I completely understand her reasoning. She wanted grandchildren. She must have known if I knew what could become of the skin between my vulva and rectum during childbirth, I may have joined the nunnery instead of motherhood.

The first time I did hear the word, I was a twenty-something professional working for a large corporation. A co-worker who recently had a baby somehow felt it was her civic duty to give me the nitty-gritty of what can happen to your perineum during the delivery of a child.

After I received the blow-by-blow, I walked out of her office looking like I had seen the Ghost of Christmas Yet-to-Come, with a rectum closely resembling Kim Kardashian’s lips in selfie mode.

But I was young and single. The thought of having babies was far away. Besides, from what I heard, it didn’t happen to everyone. I was certain I would be one of the lucky ones when the time came. So, I tried to relax and forget about it.

Fast forward to Delivery Day. I am the age of thirty-one and in the throes of childbirth. Screaming every obscenity with each contraction that would make even the devil blush.

After the worst pain known to man was over and my beautiful baby was on this side of the world, it turns out I wasn’t one of the lucky ones. I didn’t feel a thing at first. Not until all the drama of what just went on down below the waist subsided.

“My God, what is that PAIN?” I screamed. “Why does it hurt like I was accosted by a jack hammer?” For a moment, I started to panic. Wondering if they got confused. I came in to have a baby, not a colonoscopy performed by a member of Laborers Union #60.

And then I remembered. It came back to me like last night’s chimichanga. My co-worker was absolutely 110% correct. I got cut all right. I was also ripped like a flimsy piece of poster board.

Yup, my sweet baby girl, the fruit of my loins, tore my bottom to smithereens.

I never actually looked down there to confirm, but I heard from a witness (my husband) that my incision was in the shape of a lightening bolt. Does this make me a super hero?

But I didn’t want to see. The thought brought me back to that day at the office. It made me want to clench my posterior nether region like all those years before, but any clenching down there made me wish I was born a man.

I tried so desperately to not let the thought of its presence enter my mind. But it just kept popping up like a Whac-A-Mole at the county fair.

I was prescribed some stool softeners and a sitz bath and was sent on my merry way. When I walked, I felt as if I was channeling John Wayne. Except I wasn’t as sexy. Or nearly as cool.

The drive home from the hospital was not exactly a ride through Happy Town. Every bump and pothole was felt from here to Timbuktu. My thighs burning from holding up my own body weight. Which, I dare say, was a bit more than I was hoping for.

Ahh, the baby weight. The gift that keeps on giving.

Once I settled in at home, my mother — bless her heart — gifted me with the best item I ever received. It came in the form of a pillow. It was shaped like a donut and was soft and billowy.

Me and my donut pillow did not go anywhere without each other for a long time. We were thick as thieves. Stuck together like glue. He was the Frick to my Frack. The Ying to my Yang.

The sitz bath also helped tremendously with the discomfort. I was told to do 2-4 sessions a day. If anyone is unaware of what a sitz bath is exactly, it’s this contraption that looks like a little tub and rests inside your toilet seat. You fill it with warm water and this special solution and then you sit on it. There is a hose that you can use to aim that liquid miracle right at your incision with. It is total nirvana. 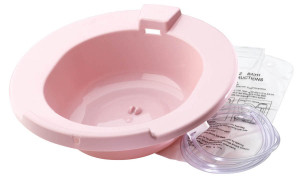 I was so completely obsessed with this thing, that my 2-4 times a day was more like 12-14 times a day. I couldn’t get enough of it. I was sitting on that toilet like the Queen of Sheba. Ordering my husband around from my perch, feeding myself stool softeners as if they were peanut M&Ms.

Anyway, glad I survived that. It has been over nineteen years, but I still remember like it was yesterday.

They told me you forget the pain of childbirth. Something about the release of oxytocin or endorphins? You know, so you’ll do it again and humanity can continue to exist.

How do I know? Well, I only have one kid. You be the judge.