When did I start to hate snow?  Like really, really hate it?  Probably yesterday.  Seriously.  I complain about the stuff, but secretly I enjoy a good snow day.  I mean, if I don’t have to go anywhere.  Or shovel it.  Or play in it.  Or stand outside.  Or touch it.

All was fine and dandy with the world, until DH had the bright idea to help him shovel the 200,000 pounds of snow off of the deck.  Some crap about the weight blah blah collapsing blah blah blah.  If you’ve been to my house and had the pleasure of enjoying a margarita on my deck when it is a balmy summer evening, then you know that my deck is just about as big as the smallest island of Hawaii.  What’s it called?  Kahoolawe?  Yeah, I just looked that up.  And I am exaggerating a little.  Obviously.  But it is big.  My deck.

You know that expression that you bit off more than you can chew?  Yeah, well, I just took a huge chunk out of Antarctica.  And it wasn’t going down.  DH was helping me.  Then he left to rake snow off the roof so we didn’t have another episode of ice damming.  And he raked the snow off the boat.  And he snow blowed the driveway.  And he snow blowed the walkway.  And shoveled the front stoop.  In other words, he was busy.

When I realized I was probably going to have to finish the job alone, I started to cry.  Not the “I’m sad because my goldfish just died” kind of cry.  It was the “holy freaking hell, this is the most frustratingly awful thing ever and I want to just throw myself over the edge of this deck and put myself out of total and complete misery now this very minute” kind of cry.  And I was dropping the “F” bomb every 30 seconds.  I might have to go to confession to wash my soul.

This wasn’t fluffy, fun, nice, sweet angel snow.  This was something the devil sent.  The top 5 inches was ice.  And a shovelful of snow felt like I was lifting half a car.  Every muscle in my arms were screaming.  My back felt like it was going to split.  And both my knees were starting to crack under the pressure.  Yeah, my good knee too.  And when I looked around, I felt like I hadn’t accomplished a thing.  Not a damn-friggin’ thing.  True story.

To make matters worse, I realized half way through it (at about hour #2) that I never stocked up on wine.  I had no wine.  Not that I NEEDED wine.  But  I WANTED wine.  And I deserved it dammit.  So, it was at that moment that I was going to brave those deadly snow plows and ice balls and crazy wind-blown tree branches and walk my butt down to my neighbor’s house to borrow some (I’ll gladly pay you Tuesday for some wine today).  The walk there and back is probably close to a half a mile.  I didn’t care.  And I knew she had it because they are prepared for an apocalypse.  Or in this case, Snow-mageddon.

I was dripping wet.  Not from sweat although there was plenty of that as well.  But it was sleeting/raining/snowing and my parka was not keeping me dry.  My hair was a mass of frozen icicles and my nose…well, let’s just say it’s hard to tell what is coming out of your nose holes when your face is suffering from hypothermia.  Remember the cart attendant at Shop Rite?  Yeah, that.

So, now I was down to a smallish but biggish ovally mound.  As I was standing there staring at it because I did not have one bit of energy left in my little biceps to lift one more smidgeon of freaking snow off of that deck, DH came around the corner and had mercy on me.

It was then that I realized I could not take another step.  Even if it was to get some red medicine that can only be opened with a cork screw.  So, I sat my wet ass in my car and literally slid down the road.  I stood on my neighbor’s front step and eagerly accepted her gift.  Not one, but two bottles of wine.  Thank you.  You are my savior.

When I got home, I took a 150 degree shower, poured that very well-deserved glass of wine, sat on the couch and fell into a deep, dreamless coma.  That is what I did on our snow day.  The End. 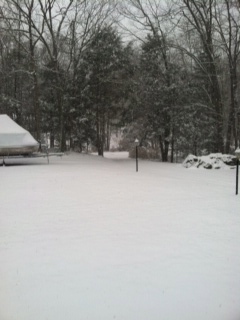 I was bored during the storm today.  I figured I probably should try to actually do something before I developed hemorrhoids from sitting on the couch for too long.  So, I decided to google what to do during a blizzard.  Here were the top 10 suggestions and why they just weren’t going to work out for me:

1)  Shovel – that’s what I have a husband for.
2)  Build a snowman – that’s what I have a kid for.
3)  Sit by the fire – Since the kindling is buried in half a foot of snow, that doesn’t appear to be happening.
4)  Go sledding – I like my head in one piece, thank you very much.  Besides, I’ll probably just pee my pants.  Watch out for the yellow snow!  Sorry.  I couldn’t resist.
5)  Watch TV – No shit Sherlock.  That’s why I’m googling what to do during a blizzard.
6)  Go exploring – Do they think my name is Lewis?  Or Clark?  I don’t know.  Do you see a resemblance?
7)  Cook something –  Hahahahahahahahahaha!  Yeah, right.
8)  Organize your home – Organize my hmmm?  What?  I’m sorry I don’t understand the question.
9)  Play games – Monopoly sucks the life out of me.  Clue?  Mr. Mustard in the Billiard room with the candle stick.  Same shit. Different day.
10) Call a friend – Nah, they are all better mothers than I am and are probably out doing something fun in the snow with their children.  Those bitches are always trying to make me look bad.

Oh well.  I tried.  I hope they get the roads cleared soon.  I need to go get some Preparation H.