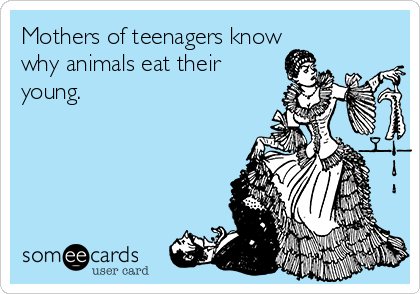 When I was pregnant with The Kid, I absolutely dreaded the thought of having a teenager. Especially a girl teenager. Freaked me the freak out. Honestly. I was making plans for either having her enrolled in a military boarding school by the age of 13 or me running off to a hideaway for “Moms with Teens” for 5 years. One or the other. Because there was no way there was going to be room in this house for the both of us. No way in hell.

We all assume teenage girls are awful. And they are. For the most part. But, there is the exception, of course. There is always an exception. The Kid isn’t horrible. I am becoming increasingly pleasantly surprised. She’s not a dang thing like me. She doesn’t cut class, doesn’t smoke, doesn’t hang out at the 7-Eleven drinking beer. I haven’t seen a hickey on her, she’s a great student and an all around happy kid. Okay, so I’m pretty sure she doesn’t do these things. My mom didn’t think I did either. Oh shit.

Still. She’s a teenager. There are days that can suck. I could definitely do without those times where there is nothing I do or say is right. Other times I am her most treasured friend. You know. Like when we are at the mall. Hmm.