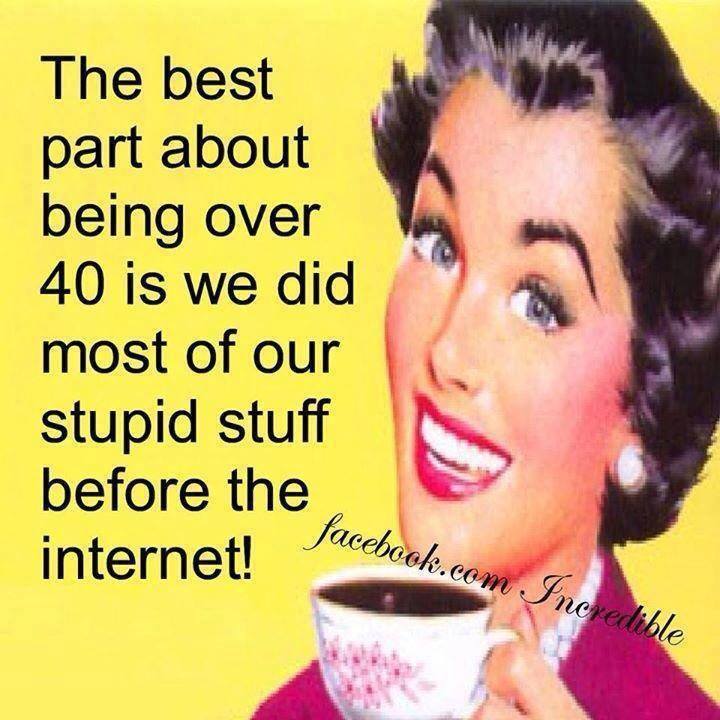 And I thought, “holy crap, no kidding.”  I can’t even begin to imagine it.  I probably would have spent more time in the principal’s office, rehab or even been shipped off to Military School had my parents known the half of it.

Being a teenager 30 years ago is pretty much the same as being a teenager now.  The difference is we didn’t get caught (as often).  We had ways of intercepting the dreaded phone call from the school secretary claiming we didn’t show up for Math Class.  If we told a “friend” a secret, it took more than 3 minutes to circulate our school and the surrounding towns.   And hiding bad grades?  Damn, I was an expert at that.  I would have been screwed if my mom and dad had access to a  “Parent Portal.”

Kids today can’t do anything fun without going to great lengths to keep it hidden.  I could, as well as most anyone, pretty much write a book on all the mishaps of my teen years.  And I may.  But for now, here are just a few:

If I knew half the shit I did would be out in cyberspace, I may think twice.  Or not.  I just thank god I wasn’t bred in this generation.  The half-brain I possessed would not have had the ability to filter out the good from the bad.  Unfortunately, only part of me has grown up.  Every day, I have to put forward a real effort to not do or say anything stupid.  I wish filters were as readily available as Youtube.  The world would be a better place, wouldn’t it?

If you liked my Cal-Pro story, you’ll love this one.  It’s quite obvious that my parents were on a budget.  So in addition to not being able to obtain Adidas, I couldn’t have Jordache jeans either.

What I did have were these totally rad gauchos.  My mom had a sewing machine.  Unfortunately for me, she wasn’t very good with it.  Every time I saw a pattern out on the table, I’d pray it wasn’t for me.

This one particular outfit stands out for me mostly because I wore it for my first day in a new school.  I was 12.  12 was a pinnacle year for me for fashion.  My gauchos were made with the stiffest denim known to man.  I believe the material was meant to upholster bus seats with.  What happens when you make gauchos out of stiff denim?  You become a triangle.  The top was a short sleeved shirt with an elastic neckline.  Why elastic?  I guess there was a sale on it.  Add in knee socks and saddle shoes and I am a total trend setter.

Honestly, I don’t know how I had any friends.  It must have been my winning personality.  Well, at least the saddle shoes were the same size.  Sorry, mom.  I know you meant well.  At least you clothed us.  But an elastic neckline?  Were you trying to kill me on purpose?  Gag.

Let’s go back to 1979.  Remember Caldor?  Well, do you remember the bin in the back of the shoe department?  You know the one.  It was filled to the brim with Cal-Pro sneakers.  Each shoe was attached to its twin by a really nice elastic rubber band.  Awesome.  Every 12 year old girl’s dream.

Yup, you guessed it.  I was one of the lucky few who got to actually own a pair of these. When all my friends had those totally nerdy Adidas and Pumas, I got Cal-Pros.  I was incredibly cool.  The envy of all the school.

The first time I tried them on was at gym class.  When I got them on, I saw that one shoe was a whole size larger than the other.  I literally spent the entire class with my toes lined up so it would look like they were the same size.  I’ll tell you, playing dodgeball with your feet pressed together doesn’t work very well.  Let’s just say I was an easy target.

I’m not sure what ever happened to those sneakers.  Did my mom return them?  I don’t remember.  I guess I blocked it out.  And the rubber band system?  What were they smoking at the factory?  Thanks a lot potheads.  You were a huge help in my development and for that I’m forever indebted to you.

I am the mother of a 14 year old.  I am just about at that stage in my life when I will have to start searching her friends’ bags when they come over for any hidden paraphernalia.  For instance: beer, vodka, bongs…

Now I was no saint when I was a teen.  But I didn’t start acting like a complete dumb-ass until I was at least 16.  What’s with these kids today and their need to grow up so fast?  Teenagers are stupid.  Even though at this age I proclaimed to my mother that MY children will be allowed to do whatever they wanted.

I worry that my kid will make the wrong decision someday but for right now I’m feeling pretty confident that she won’t.

Here are just some of my reasons:

So, to those mom’s who also check bags…I think you may be safe with this one. Unless she’s holding it for someone else.  But that is a whole other topic.