I suppose you’re wondering where I’ve been. Or maybe you haven’t been wondering at all. Perhaps you are happy that your email box or your Facebook timeline has been lighter.

It’s been a while. My brains are stuck on total freeze mode and cannot, will not, function. I am forgetting about appointments, or thinking I have appointments when I don’t.

I have a to-do list that is longer than Santa’s Naughty list. I have writer’s block so bad, I need a chisel. And I want to get out of bed about as much as I want to eat goat livers for breakfast.

Just the thought of the act of moving makes me want to cry. Sometimes I will sit and stare at the remote on the coffee table. Willing it to levitate in my direction. And if it doesn’t (it doesn’t)? Meh. Watching that episode of Friends when Ross whitened his teeth too much for the forty-second time won’t kill me.

My house is flooded. I have holes in my ceiling from ice damming and buckets strewn all around. It looks like one of those kiddie water parks in here but really, I live in a cave.

My hair is overgrown, I need a dye job. I could use a good wax to my lip. I haven’t put on makeup in so long I don’t even remember where I keep it. My shaver has rusted out from lack of use. And my butt hasn’t seen a pair of jeans in 45 days because I know they won’t go above my ankles after sitting and eating nothing but pulled pork sandwiches and Smiley fries all season.

It won’t stop snowing and the temperature doesn’t seem to want to reach 30 degrees. If it does reach 30 degrees, people are out in shorts and t-shirts like we live in the middle of the Sahara. Which just pisses me off even more.

The snow is piled so high that the simple act of walking out to fetch the mail from the mailbox takes twice as long. That is if I can even reach my mailbox.

Yes, I am ashamed to say that I have let this horrible winter win. It got the best of me. I have the energy of a sloth. The brains of a goldfish. And the attitude of a bi-polar Princess Aurora.

But, it is March. That means it’s a little closer to something besides winter. We put the clocks ahead an hour this weekend which translates to “there will be light.”

So, as I stare out my window, looking at the snow that is edging up to eye level, I am grateful for March. Are we getting up to 9″ of snow by Thursday? Yes. So they say. But it’s March. There is a light at the end of the tunnel.

I will pull my head out of my ass and will become one with humanity.

On second thought, check back with me in April. Yeah. April seems more attainable. After all, isn’t that when bears come out of hibernation?

NOTE: As I am writing this, I get an email from our local Patch with this headline: “A Little More Snow, Dangerous Winds, 25 Below Zero Wind Chills.” It’s time to move.

I realize not everyone has the distinct pleasure of living in a place where you get projectile vomited on with the white stuff before winter has barely started. But I do. Which gives me the qualifications to get my bitch on.

I have lived in the Northeast for about 40 of my nearly 48 years of life. Which is a strange choice seeing that I have no outdoor winter skills to speak of whatsoever. I don’t ski, I can’t stand up on a pair of ice skates, and snowboarding? The thought makes me hyperventilate and I’m not even claustrophobic. I used to be able to build a mean snowman, but I lost that skill somewhere around 1982.

With that being said, I usually don’t mind a good snowstorm. As long as I have a bottle of my favorite wine, some french fries and working WiFi. Which, by the way, can be touch and go if the storm is bad enough.

But something happened to me this year. I snapped. And I’m embarrassed to admit that I’m just about ready to join the Snowbirds in Florida. Hell, they have it right with their afternoon cocktails, early bird specials and bed by 8.

Also, I realized the other day that I was in dire need of some sunshine when, while watching television, I paused the TV on a commercial advertising an island vacation and I put my face up to the screen to get a dose of some Vitamin D. Just so you know, it didn’t work so don’t bother.

Anyway, I’ve devised a list of why I just can’t take it anymore. It wasn’t hard to come up with.

So there you have it. I’m sure there is more but I’m too depressed to think any more. I’m going to go sit under my desk lamp and pretend I’m in Cancun. Or hibernate like a bear.

PS – After the writing of this post, our furnace died. I believe it tried to hibernate as well. What sucks worse than winter? Having no heat when it’s 7 degrees outside. 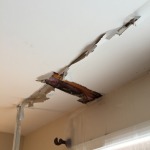