There really needs to be a refresher course, or should I say — some seriously intense classes — offered for women (or men) reentering the workplace, whether it be after raising children, or just taking a long break for whatever reason. Technology change is enough to make me feel like I’m on a ship during a tsunami. It makes my head spin. Yesterday there was the rotary phone. Today there aren’t any phones at all. I’m not lying.

I started a new job less than a month ago. This company has a “Workplace of the Future” environment. The first day, it took me about an hour to lift my jaw off the ground when I found out there are no phones. And another hour to wrap my head around the fact that there is no voicemail.

Well, hell. I remember when voicemail first showed its face, now they are doing away with it? How can that be? I also walked to school barefoot in the snow. Uphill. Both ways. Then they invented shoes. Oh sorry. That’s my mother’s story.

There are no offices either. Just a large space with about a million cubicles. There are “white noise” speakers in the ceiling so you can’t hear each other’s conversations. Everything is done online. It’s all very futuristic. Although very different from the type of corporations I used to work in when I was a young woman, I have to say I like it. 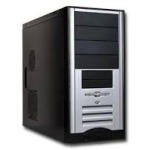 Remember the CPU? I believe it stands for “Central Processing Unit” and it is, or was, the size of one of those mini-fridges you keep in a dorm room. In my day, they sat under the desk practically at your knees. Where you would slam your legs into it and your stockings would get snagged on the metal edge causing your stockings to run.

If you were lucky enough to find someone who had clear nail polish on them, you could stop the damage before half your leg skin was exposed. Possibly the worst thing that could ever happen. Showing skin in the office? Now it’s all you see. But I digress.

I had to upload (download? who knows the difference?) some software to my computer for a task I needed to complete. I took the CD (I could have said floppy disk but I’m not THAT old…okay I lie, I am) out of the sleeve it was stored in and proceeded to insert it into the computer.

I looked under my desk for the CPU. It wasn’t there. I looked on my desk, behind my desk. I got on my hands and knees and followed the cables into the wall. Can you just picture my forty-eight year old black-slacked ass sticking up in the air? I’m sure it wasn’t pretty.

With all this new-fangled technology, perhaps they keep the CPU INSIDE the walls? Or in a nearby closet? Don’t tell anyone, but I even looked on the ceiling. I was desperate. Not to mention perplexed. I was thisclose to hauling out a ladder and climbing on the roof.

After what seemed like an eternity, I finally established there are no CPUs. They went down the river with the voicemail. I started to feel around the computer screen. They have televisions that you can put a DVD directly into. Why not a monitor? After about twenty seconds, I realized, no. Not in the monitor. Not this one, anyway.

I sat there with my head in my hands repeating to myself, “think, think think,” when I noticed the laptop that is “docked” on my desk. “But I don’t use the laptop,” I thought to myself. I use the keyboard and a large flatscreen monitor when I do computer work.

The laptop is so I can take it home with me to do work if I need to stay home for the day or whatever. I thought it was just sitting here staying charged in that thing the people around here refer to as a “docking station.” But I took a shot and felt the side of it. What did I have to lose? Nothing. Because I hit pay dirt. BAM! There it was.

With a red face and the push of a button, I was in business. And I didn’t even have to ask anyone. I do have to admit that I felt like my grandmother at the time.

After three weeks, I still work there so I guess I’m doing something right. What I’m trying to say is, if I can do it, so can you. So, good luck to all you people who are going back to the grind. I have hard core respect for you.

Oh and I still wear stockings. Old habits die hard, my friends. Except now I keep a bottle of Maybelline Clear Coat in my bag at all times. But I don’t think I’ll be needing it. After all, there is no CPU.