Needless to say, we didn’t go to Fire Island. The idea of us walking in the dark in a place we’ve never been to didn’t really appeal to either of us. Lord knows I love food, but I didn’t need to work that hard for it. Ocean or not.

DH remembered a restaurant someone recommended…an over-priced italian place right on the sound. We decided that sounded like a nice place to celebrate our anniversary dinner, so he called to make a reservation.

Unfortunately, the only open spot was at eight, but at that point we were pretty happy with anything so we took it.

Since we had so much time to kill, we decided to go into town to see if we could find a cute place where we could have a cocktail on the sidewalk. Well, not ON the sidewalk exactly. That would be weird and probably illegal or something.

We quickly settled on a trendy little spot (with some tables outside) with THE BEST margarita with muddled cucumber. Don’t knock it ’till you try it. I raved so much about it, the server actually got the bartender to write down the recipe for me.

But I totally digressed there.

When the maitre de showed us our street-side table, I noticed a woman leaning over the fence/wall, right where we were going to sit. I maneuvered myself around her bobbing and weaving body and sat pretty much right under her. I didn’t ask her to move because I don’t like confrontation. I was fine with her hair hanging down into my plate. Really, I was.

At first I thought she had an impairment. A disability of some sort. But then the stench of alcohol permeating from her pores was so intense I almost didn’t have to order a drink because I was beginning to catch a buzz off her breath.

After about five minutes, the man she was with was able to finally pry her off the wall/fence and into a waiting car. Just in time too. My blood alcohol level had most likely reached .08%. And that was before I ordered a drink.

We slowly drank our cocktails, but somehow we still had some time to kill. We stopped into a liquor store and picked up a bottle of wine to share for a nightcap later on our private balcony, then ducked into a dollar store to purchase a couple of wine glasses, and headed off to dinner. 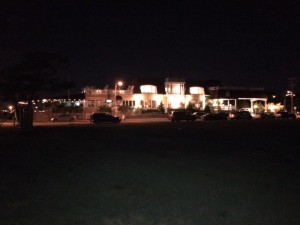 It was dark when we pulled into the parking lot, but the restaurant was lit up like a Christmas tree. It was beautiful. There was a wedding going on and the atmosphere was lively. The way I like it.

DH spoke to the hostess and explained it was our anniversary and asked for a table out on the back deck. We were led outside to a table “on the rail” except the rail was a solid concrete seawall that came to my neck. 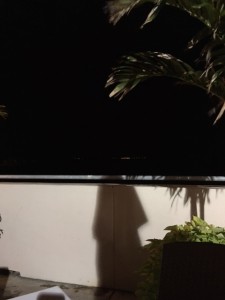 I know there was salt water on the other side because we were told so. I just couldn’t see it. Unless I stood on tippy toe. Even then it was so dark out, I would not even have known there was water out there save for the working lighthouse a mile or two out.

DH ordered a beer, I the house wine. My wine tasted like swill. I had barium better than that. Somehow I was mistakenly under the impression that the house wine in a fancy italian restaurant would be good.

Not sure where I got that idea from.

For dinner, I had the clams as an appetizer and the spaghetti and meatballs as an entree. Simple, sure. But I wanted something comforting for some reason. Besides, we were in an italian restaurant. Isn’t that what you’re supposed to order?

Needless to say, half the clams wound up in my napkin. They were so chewy, if I didn’t actually take them from the shell myself, I would have thought I ordered cow balls.

And the meatballs? My Irish grandmother made better. I made better and I don’t even make meatballs. As for the sauce, I was pretty sure it was taken right out of Chef Boyardee’s kitchen.

We had a nice time though. It’s about the company, not the meal. We laughed it off. Anyway, it seemed to be par for the course that weekend.

After we got back to the hotel, we uncorked our bottle and sat on our plastic adirondack chairs on our private terrace, and sipped wine out of our dollar store glasses while overlooking our little piece of water.

But it doesn’t end there.

On the other side of the shore, there was a building. We didn’t know what it was because it was dark, but we did see a couple of cars pull into the parking lot and turn off the headlights while their vehicles were still in motion.

We immediately went into Magnum PI mode. Trying to crack a crime that may or may not have been happening. A couple of dark figures got out of their cars and walked into the shadows. Was it a drug bust? Disposing of a body? A heist?

Most likely just a couple of kids sharing a joint, but it was fun to imagine something sinister.

Fast forward to the next morning (because you don’t need to know the in-between…wink wink). That long-awaited spa-like shower I was looking forward to taking was not to be.

The faucet was broken. The water temperature couldn’t be regulated nor would it turn off once it was turned on. The water was hot and getting hotter by the minute.

Well, there was always breakfast.

After we got dressed, we made our way down to the 5×6 foot lobby to eat. 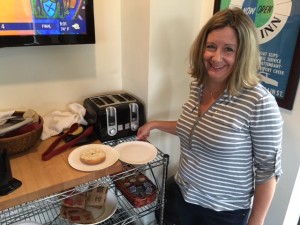 On our way down, we saw a lady come out of the front door with a package of Pop Tarts. I turned and made a joke to DH about it.

When we entered and made our way to the “buffet,” we saw that our choices were stale bagels, three types of cereal, and frozen Leggo My Eggo waffles.

I was desperately searching for the Pop Tarts that suddenly didn’t seem so bad, but the early bird catches the worm, and I lost out.

I settled on the bagel and cranberry juice when what I really wanted was a diner and a stack of pancakes. DH had the same but with a cup of coffee.

We took our Top Shelf breakfast back up to our balcony. Across the way, where the night before the Crime of the Century was going down, we saw was actually a fire training center. 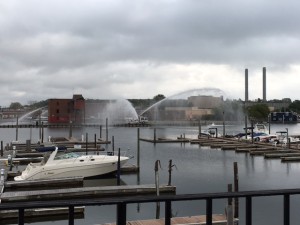 Yes, a building on “mock” fire with firemen trying to put it out with big hoses, and all the works. It was cool, but just the topper to the end of our weekend.

As we were leaving, DH told me how much he enjoyed our little room. Anyone who knows him, knows he is not a traveller and especially abhors hotels. His comment was worthy of a heart attack, but made me happy nonetheless.

Long of the short, but long story…I discovered that Long Island does not mean The Hamptons. After all that it was a great anniversary celebration, Hamptons or not.