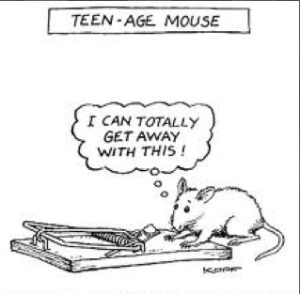 I remember when The Kid was an infant and I was carrying her around in one of those convertible car seat numbers. DH and I were at this store where they sell plants. I don’t know why because my thumb is just about as green as a carrot, but there we were.

A lovely woman walked up to me and said, “Enjoy this stage because it’s the easiest.” I looked at her like she was nuts.

I was in the throe’s of midnight feedings, witching hours and projectile vomit. Not to mention the dairy factory hanging from my chest that made more milk than was demanded. There was no way in hell that she knew what she was talking about.

It turns out, she did know what she was talking about. She was totally and completely 110% correct. The terrible twos were just that. And the threes were beyond awful. I didn’t think anything could be as hard as the threes.

But alas…there was something. The Teen Years. It’s like trying to pass a rock through your rectum. It’s really hard.

I remember being a teen. I sucked. Although my teen isn’t as horrible as I was, she’s still a teen. I will put money down that even Mother Teresa wasn’t all that great when she was 16. Okay, maybe she was. Bad example.

I’m talking about the attitude. You know the one? Yeah, that. Sometimes I fear her. My kid. The kid I pushed out of my down below. The kid I gave life to. The kid who is 31 years younger than me and weighs as much as that one persistent chin hair that keeps appearing out of nowhere.

When I ask a simple question like, “did you do your homework or empty the dishwasher,” I am met by Sybil, the girl with 16 personalities. Accompanied with the ever-present eye-roll. The eye-roll that is universally understood. It says, “I hate you, you are annoying, now go away.”

On top of that, there’s the worry. It was so easy when you knew exactly where they were. Which was usually within yards of us.

There was the quiet fear of injuries from jumping on beds or if they were going to decide to play Hide & Seek when you turned your back for 2 seconds at Kohl’s. Instantly turning us moms into crazed lunatics, screaming for our children, thinking they were gone forever, when they were merely feet away, mocking us from under a clothes round.

These days there are boys (or girls), and cars, and drugs, and alcohol everywhere.  Not to mention social media. Hoping they don’t befriend some deranged stranger who may come and chop her up into little pieces behind the mall.

All these things make you worry so bad, the grays are doing double-time. The wrinkles making a map to Hell on your forehead.

There is also the very simple, scientifically proven fact that teenagers’ brains aren’t fully developed; therefore, allowing them to truly feel they are invincible. This little scientific fact lasts until a human is into their twenties. God help us.

So, what is my advice to survive this stage that is called Teen-dom?

Other than all that, teens are great. You know, if you like to sit through the same episode of *Caillou 2,000 times while someone is hitting you in the face with a mallet.

*For those of you who are blissfully unaware of who Caillou (kie-you) is, he is an annoying and whiney little 4-year old who was created to make the lives of parents everywhere absolute hell on earth.