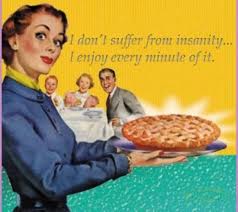 The Kid does sports.  She is on the JV Field Hockey team at school.  She also is an Irish Dancer.  Before you roll your eyes and say that Irish Dance is NOT a sport, think again.  Anything that requires dedication, desire, all of your blood, sweat, tears and money, lots and lots of money, is a sport.

Last weekend she had a dance competition.  Anyone who partakes in any kind of sport, knows what a freaking affair it is.  We were gone for literally 10 hours.  TEN.  From the moment we pulled out of the driveway to the moment we pulled back in.  An eight and a half hour shift at My Retail Job is less draining.

While I am standing there, waiting, waiting and waiting some more, surrounded by crying and screaming competitors, listening to the “bang bang bang” of hard shoes practicing over and over up and down the halls and hearing the same irish music again and again for 6+ hours, I was thinking about what we mother’s do for our children.  And why we do it.  Well, we do it because we love them.  But is that enough?   This is the crap I need to vent about right now because I will be doing this same exact thing tomorrow.

I sat in a car for what was supposed to be one hour and 20 minutes.  I cannot sit in a car for one hour and 20 minutes because my body is not that of a 15 year old.  After 20 minutes, my knee starts to pulsate.  After 32 minutes, I have sciatica pain running down both legs.  After about 56 minutes, my bunion starts acting up in my riding boots because when I left in the morning it was 58 degrees and I felt riding boots were in order.  If I had bothered to look at the weather report for the day, I would have seen that flip flops would have been the smarter choice.  Freaking Indian Summers suck.  Just make up your mind Mother Nature.

Our one hour and 20 minute car ride turned into a 2 hour and 20 minute car ride because, well, I didn’t know why.  I was guessing an accident.  But there was a nothing.  Nothing.  We were crawling for no reason at all.  I’m not lying.  No reason at all.  NONE.  Understand?  The Whitestone Bridge is 3,770 feet long.  If my calculation is correct, it took me 62.83 seconds to go one foot.

When we arrived, it took me five minutes to extract myself from the position in which I was in from the driver’s seat of my car.  And another five minutes to walk to our destination, just mere feet into the venue.  Because my joints were stiff.  I think I caught a glimpse of what a 92 year old woman feels like.  And it ain’t pretty.  Just so you know.

It’s great fun to be body slammed.  Continuously.  I swear I feel like I’m at a punk rock concert every single time I subject myself to this madness.  I also really love it when people form a human chain in the middle of the corridor.  That’s ok, people. Really, I did not need to pass.  I’ll just take out my magical wings and fly over you.  There are enough people at these venues to heat the inside of Yankee Stadium and I was wearing a sweater with a tiny camisole under it.  Which means I had to keep the sweater on.  Again, it would have been smart to check the weather report for the day.

The options for lunch (which was really dinner, which was really lunch because we somehow missed that meal):  cardboard pizza as stiff as my joints after a 2 hour car ride or 2 for 1 american wedge slices.  I opted for the wedge.  The cheese I think was supposed to be a slice of american.  I’m sure that at the start of the day it looked just like that.  A slice.  But by the time I got to it, it resembled that of Cheese Whiz.  So why did I choose the sandwich?  Because it was the bargain of the day.  And I am not one to pass up on a good deal.  In the meantime, The Kid scored herself some spaghetti and meatballs.  Don’t ask.  I’m not sure.

After what seemed like an eternity, “they” were ready to announce the awards for The Kid’s competition.  The outcome was not good.  But I will say she danced her little ass off.  She was amazing.  She tried her hardest.  It was the first time doing a competition in months because of an injury.  So this mamma bear was extremely proud nonetheless.  BUT, I now had to deal with a very disappointed child.  In a car ride where the only thing I can concentrate on is how I can manage to keep my legs from atrophying.

That felt good to get off my chest.  Thanks for listening.  I get to do this all over again tomorrow.  Come join me.  I’ll be the woman with wine in her water bottle.  Someone get me a lobotomy.

2 Replies to “The Vent of a Half Irish Woman”