I have a secretarial “degree” (aka “certificate”). I went to a secretarial school. Now they are as extinct as the pterodactyl. It seems these days you need a degree to be a secretary.

Some companies will only hire you if you have a two- or four-year degree. While others will hire you based on experience. You know, as long as you started working around the time Eisenhower was in office.

But then you’re too old.

I got lucky. I found a wonderful company to work for. I have no four- or two-year degree. And I’m kinda old. Ok, so maybe not dinosaur old, but I’m no spring chicken either. My twenty plus year secretarial/admin experience is acceptable.

Anyway, my profession has its perils, believe it or not. And I’m finding out quickly what those perils are.

Back in the day, people would complain and warn me about the dreaded “Secretarial Spread.” It sounds obscene (don’t google it, because what popped up would have made even Hugh Hefner blush). But it’s not what you might think.

The official definition according to Urban Dictionary:

“Secretarial spread means sitting down for a long period of time while the hind-end spreads outward in order to accommodate the chair. “

Back in the day, I didn’t worry about it too much. I was young, I exercised and moved a lot. I wore high heels and ran in them.

No, seriously. I did.

Now if I so much as put on a pair of heels that measure higher than half an inch, I run the risk of being hospitalized.

Fast forward 30+ years and there are all kinds of reports and studies on what can happen if you sit all day. In a nutshell, it reduces your lifespan. The instructor at the gym referred to sitting as “the new smoking.”

The only time I touched a cigarette was back in 1982. And I didn’t even inhale.

No, I wasn’t hanging out with Clinton.

Since working back in the profession for which I was trained after a very long respite, I’m comprehending what they meant by the “Secretarial Spread.”

When I wrote the first draft of this post months ago, I was sedentary.

“Sedentary.” A word I never thought in a million years I would use to describe myself.

But yet, that’s what I was.

I got up to go to the bathroom or the water cooler during the day.  When I got home, I took off the bra, put on my “non-yoga” yoga pants, and moved my ass to the couch.

Ok, so I still get home, take off the bra, and move my ass to the couch. Because I’m tired. I’m just TIRED.

But during the day, I’ve been exercising. I go to the gym at work, I do stretching exercises, planks, push-ups, what have you, in the morning before I leave for work.

And it feels great.

But the sitting has caused me to develop hip flexor problems. Oh.my.god. Does that hurt! Had I not been “sedentary” for so long, I don’t think that would have happened.

This hip flexor situation has since given me lower back pain. You know, because my back is compensating for the job my hip flexors aren’t doing.

I think. I mean, I’m no doctor, but this makes sense. Right?

My abdominal wall is also weak. Which is not helping my cause. But I’m working on that.

I’m working on getting myself to a good place health-wise. It’s time. I decided a wheel chair, or even a cane, would not be a good accessory for me.

I mean, I don’t really accessorize anyway, so why start now?

The second part of that definition, according to Urban Dictionary:

“It can be changed with exercise, and activity away from sitting down on one’s spread for too many hours a day.”

I had this thing called a “Veridesk” installed on my desktop at work. It has levers and allows you to lift the thing up so you can stand while you work. It’s a pain in the ass to pull up, but the way I see it, I’m also getting some upper body strength training in. 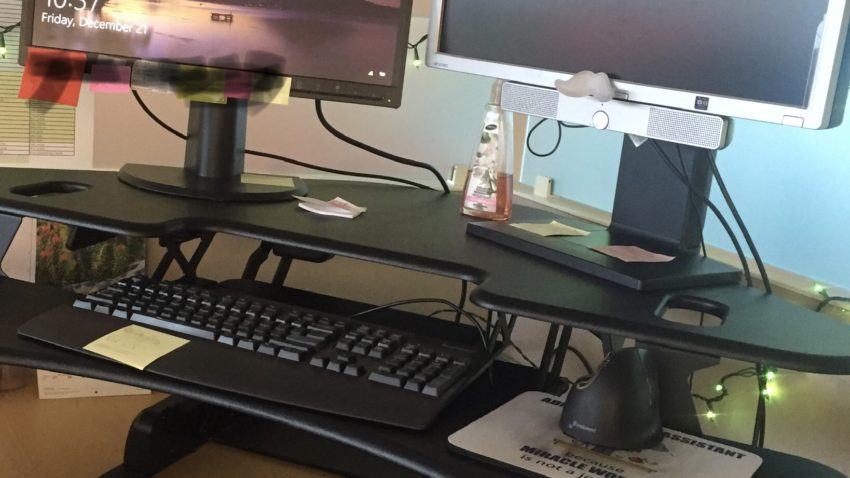 Getting into shape at work. That brings the expression “multi-tasking” to a whole new level.

If I save one person from the dreaded “Secretarial Spread” then I have done my job.