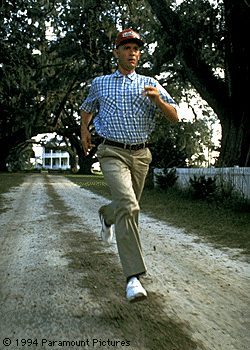 I was thinking about something today.  Running.  Not “running” from the law.  Or “running” away from a bad relationship.  “Running” as in “I ran around the block 5 times.”

I was not a runner.  I abhorred it.  Oh wait.  I was on Track Team when I was 14.  And I only did it because my gym teacher at the time thought I was fast and wanted me on his team.  Which was really weird, because I skipped gym a lot.  I hated any type of physical activity.  That and my legs looked like the legs of a newborn fawn.  I would rather have died than let the boys get a look at those babies in the hideous shorts we were forced to wear.  In fact, I even went and got myself Mono just so I could skip gym for half a year.  Well, not really.  I mean, I got mono.  But not on purpose.  I digress.  I only did track for a year.  Because that crap sucked.

I tried running again about 6 years ago.  At which time I realized that I just can’t run for long distances without getting this weird pain in my side and other weird pain everywhere.  So I stopped.  I never got the concept.  It hurt.  Bad.  I was pretty sure the people who ran just liked to torture themselves.  They would have monthly meetings to see what other torture they could inflict on themselves.  Just for fun.

In February, I decided to get healthy by eating right and exercising.  I started out by walking.  Then it turned into a little walk-y here, a little run-ny there.  But even after a few months, I was having a hard time running for more than a couple minutes at a time.

Then I did my first 5k in August.  And was able to complete it with a little help from a friend.  I did it without walking once.  I almost died.  Ok, so maybe died is a strong word. But I sure the hell thought I would collapse.  I remember thinking that someone may want to have an ambulance somewhere between here and there because I was going to need it.

Needless to say, I didn’t die.  I didn’t need that ambulance.  But it hurt.  Like hell.  I had pain everywhere.  My stomach, my legs, my back.  But something happened to me that day.  I realized that even with all the pain, that I actually enjoyed it.  I released enough endorphins to last me a week.

I completed my second 5k this past Sunday.  And I beat my time by 2 minutes.  And I didn’t feel like I was going to die.  In fact, I could have gone another mile or so.  Because I have become a runner.

So, the point of my story is this.  Because I cannot get to a point without making my story long.  I’m not saying you WANT to start running.  But I am saying you CAN run.  Or you can do whatever it is you think you can’t do.  Please, you must rely on my word here, if there is anyone in this world who would make THE BEST poster child for laziness, it would be me.  Ask anyone.  Really.  So go.  Fly.  Be free.   Go do what you think you cannot.  Because you can.  I am living proof.