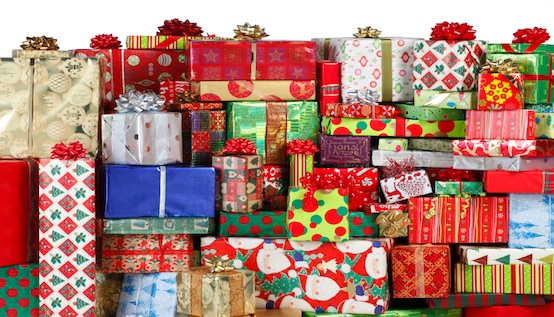 I blame my mother for my Christmas obsession.  What is my Christmas obsession, you ask?  The ridiculous problem of not knowing when to stop purchasing gifts for Miss Spoiled Pants (aka The Kid).  I know.  I know.  There are children starving, poor and living in the streets all around the world.  I am aware of that.  And for the record, I also buy gifts for underprivileged families every Christmas.  And contribute to charities throughout the year.  So it makes me feel just a little better about my obsession.  But just a little.

Here is why I blame my mother:  When I was a kid, we couldn’t even walk into our living room from the gifts spilling out from under the tree.  Granted there were 3 of us and our living room was about the size of a shoebox.  But still.  We couldn’t walk into the room.  That right there is a child’s best dream come true.

My parents did not have a lot of money in the early years.  Mother started recycling before it was in fashion.  Purchasing used toys from the local Salvation Army.  Before you get all germaphobe on me, she cleaned them thoroughly with Clorox.  She swears.

And then later on, when there was a double income, I received gifts that would stack up practically to the ceiling.  This would happen until my last Christmas at home.  It was pretty awesome.  Until I became a mother.  What is the expression?  Nature or Nurture?  I think this had to do with the latter.  And I can’t seem to stop.

When The Kid was little — and when I say “little” I mean under the age of 10 — she was incredibly easy to buy for.  Or should I say CHEAP to buy for.  Because anyone who gives you a list a mile long is easy to buy for.  I could buy 100 bucks worth of Fisher Price shit, throw it under the tree and make it look like she hit the mother lode.

When she got into the early double digits, it started getting a little more expensive.  A little.  She wanted stuffed animals and Jonas Brother’s CDs.  Along with an i-Pod. Still, it did not pose much of a problem.  Totally manageable.

Now?  Good Lord.  I’m on the verge of robbing a bank.  One weekly paycheck from My Retail Job barely covers one single item on this kid’s list.  Just so you know, she does not get this from me.  I am a bare-bones kinda gal.  The cheaper, the better.  I can get 5 outfits with $100.  Even if it all falls apart after 2 washes.

DH is not completely onboard with the over the top Christmases.  I basically have to sneak the purchases into the house.  Sometimes hiding them in the trunk or at a friend’s house for days, even weeks, until the right moment hits.  Pulling the “oh that?  I bought that in August when there was a giant sale at K-Mart” card.  Totally works.  I think.  I also feel the need to fulfill most everything on her list.  I don’t understand it.  I never had half the shit she gets.  To make matters worse, she won’t share her closet with me.  But that is a subject for a different blog.

I just really miss Mr. Price, Melissa and Doug.  They were more my speed.  They have been replaced by Apple, Jack Wills and North Face.  North Face.  She doesn’t even ski.  I’m really confused.  Oh well.  Three words that don’t seem to be a part of my vocabulary this time of year:  “Just Say No.”  I think I need help.  In the meantime, if you need some tips on how to hide purchases, just inbox me.